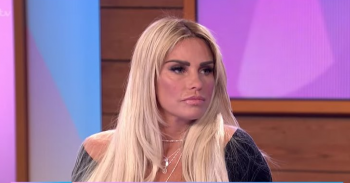 She isn't happy with the way she looks at the moment

Katie Price has declared that she thinks she looks “disgusting” after gaining over a stone and she has vowed to lose weight.

Katie, 40, addressed her body woes while appearing on Loose Women today and insisted she doesn’t like the way she currently looks.

Despite not appearing to look any bigger, the former glamour model said she isn’t happy with her weight, which stands at 63kg (9st 9lbs).

She revealed she has joined a gym in a bid to shed the pounds, but she has only used the spa facilities so far.

“But overnight it has all changed. I’ve got dimples here and here. I have put on weight and I look disgusting at the moment.”

Katie went on to lament that she now has “cellulite” and wants to do something about her weight.

As the Loose Women panellists tried to tell her that she doesn’t look bad, Jane Moore told Katie that she thinks she may have “body dysmorphia”.

When she asked Kate what she sees when she now looks in the mirror, the reality star replied: “My mum.”

Her boyfriend Kris Boyson, who is a fitness trainer, has recently been helping her get healthy.

In a clip from the new series of her reality show, My Crazy Life, Katie is seen sitting at the dinner table in her underwear with Kris, a trick to encourage weight loss, as they tuck into healthy spaghetti Bolognese.

Kris, 30, was previously heard telling Katie “you need to lose weight” in an Instagram video that has now been deleted from her social media.

Last month, the mum-of-five was criticised by trolls for looking fuller-figured while on holiday in Thailand with Kris and she was forced to deny she was pregnant.

Keen to prove the haters wrong, she then shared an Instagram video of her bikini body, where her stomach appeared flat.

What do you think of Katie’s comments about her weight?