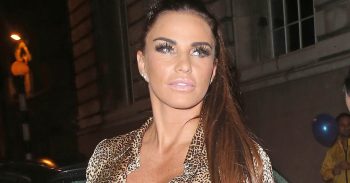 The pair recently jetted off to Thailand and in photos obtained by The Sun, they were heading for a couple’s massage after arriving in the country.

Katie, 40, opted for a casual look in cream jogging bottoms and a grey cropped top.

But Katie’s curvier frame made many fans speculate whether she was pregnant with Kris’ baby.

✈️Airport ready wearing @jyylondon ✨My summer range with @jyylondon launches next month so excited for you to see!👙👗Use Code: KATIE20 for 20% OFF their site💋 #partner

But a rep for Katie told the publication: “No, she is not pregnant.”

The mum-of-five jetted off on a romantic break with Kris over the weekend.

The former glamour model is believed to have left children Junior, 13, and Princess, 11, with their dad Peter Andre and her son Jett, five, and daughter Bunny, four, with ex Kieran Hayler.

Meanwhile, her eldest son Harvey, 16, is thought to be in the care of her hairdresser, Louisa Roy.

A source told The Sun that Harvey enjoys staying with Louisa, who is a plus-sized influencer on social media and runs salon business LA Studio.

They told the paper: “Harvey loves it there. He’s at school everyday and then back to Lou’s in the afternoon.”

However, it’s been said that Katie is due in court on Wednesday (March 13) after she was probed by police over a playground rant.

Katie apparently shouted at her ex Kieran Hayler’s new girlfriend Michelle Pentecost as she was picking up kids Jett and Bunny at a primary school, where Michelle was collecting her son, last year.

Katie allegedly screamed at Michelle: “Are you enjoying [expletive] my husband?”

Michelle made a formal complaint about Katie, while other parents also intended to take action by speaking to the police after Katie “shouted and swore” at them at the school in West Sussex.

According to The Sun, a charge sheet has accused Katie of using “threatening or abusive words or behaviour within the hearing or sight of a person likely to be caused harassment, alarm or distress”.

A spokeswoman for Sussex Police told the publication this week: “Katie Price has been summons to court to answer a charge of using threatening, abusive, words or behaviour to cause harassment, alarm or distress in connection with a verbal altercation.

“She will appear at Crawley Magistrates’ Court on March 13.”

A spokesman for Katie said: “This is nothing that I’m aware of. In fact Katie is actually away on a break in Thailand.”

Ent Daily contacted reps for Katie on the story.