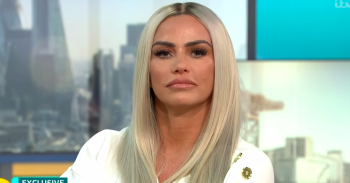 The pictures were to promote the glamour model's new clothing range

We’ve yet to encounter anyone who can divide a nation like Katie Price, and this weekend the former glamour model has done it again.

Followers have rushed to criticise the reality star after she shared some pouting shots of her two daughters, Bunny, four, and Princess, 11.

The 40-year-old took to Instagram to share shots from a new photoshoot to promote her new clothing line for kids, Princess & Bunny Boutique.

Next to a shot of the two little girls – whose dads are Peter Andre and Kieran Hayler – Katie wrote: “My girls are just beautiful 💕💕💕.”

And while most fans agreed that Princess and Bunny are pretty, many more thought the shots were inappropriate – particularly the duck-face pout.

One wrote: “Agreed but should not know about pouting at their age.” Another commented: “Lovely children… But please no pouting!!!”

A third added: “Yes they are beautiful but I think a smile on 2 young girls would look more beautiful than a pout.”

Others were concerned about the provocative elements, with one complaining: “No need for the filter and pout, they are a little young for that carry on.” A second wrote: “They are beautiful without the pouting and tops hanging off them.” Some even accused Katie of putting her daughters in makeup, with one asking: “Why does Princess have her eyebrows done at her age?”

Many also thought sharing shots of the kids at all was inappropriate, with one slamming: “Honestly. Is nothing sacred to you? Just because you choose celebrity life doesn’t mean your children will want to. Allow them some privacy.” Another said: “You are encouraging them to grow up too quick, let them enjoy childhood.”

Some, though, defended Katie – who is also mum to Harvey, Junior, and Jett – with one fan writing: “Actual adults moaning because the kids are pouting. It’s a picture of 2 little girls. Some people must have a lot of spare time for this to be a problem for them.”

A second wrote: “They’re beautiful.. I don’t care what anyone says about you, you are a great mum.”

Another complimented: “Princess is just unstoppable, my god what an attractive little girl and that hair! 👌🏻👌🏻👌🏻 They are both cute don’t get me wrong but she is striking on another level.”

One more added: “Omfg princess 💕💕 she already looks like a model!!! Them eyes! ❤️All of your children are perfection Kate xx.”

Read more: The Chase star Mark Labbett’s wife accused of ‘cheating on him for over a year’

There’s no denying Princess and Bunny are adorable little girls. Whether you believe that should be shared with the world is another matter…

What do you think of Katie sharing these pictures? Leave us a comment on our Facebook page @EntertainmentDailyFix and let us know what you think.