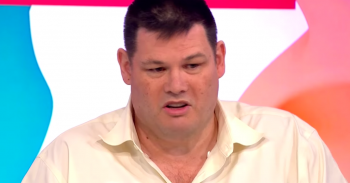 A new report claims The Chase star Mark Labbett’s wife is ­cheating on him with a man 25 years his junior.

In fact, insiders say it’s been going on since 2017 and they’ve even been on holiday together.

Sources at The Sun say Katie has been seeing a man named Scott behind her husband’s back, with an alleged friend saying: “Scott and Katie have been seeing each other since 2017. He introduced her to friends in December that year.

“It took a while for people to realise who she was and that she was married. Then one of Scott’s friends confronted her and she got angry about it.”

The pair reportedly went on a trip together to Italy’s Capri, with the insider close to Scott adding: “They have been seeing each other such a long time that he sees her as his girlfriend, which is wrong.

The pair have yet to comment publicly, and it appears Katie has deleted social media.

The couple – who started dating in 2012 – recently appeared on Loose Women together, where they talked about meeting through mutual friends and discovering they are second cousins.

Katie said of getting together: “It came from a mistake, Mark misunderstood something I said.”

Her husband added: “Fortunately it was a good mistake,” before Katie declared: “He’s a big softie, a huge softie!”

On the show, Mark also admitted he had done well, dating someone so beautiful and young.