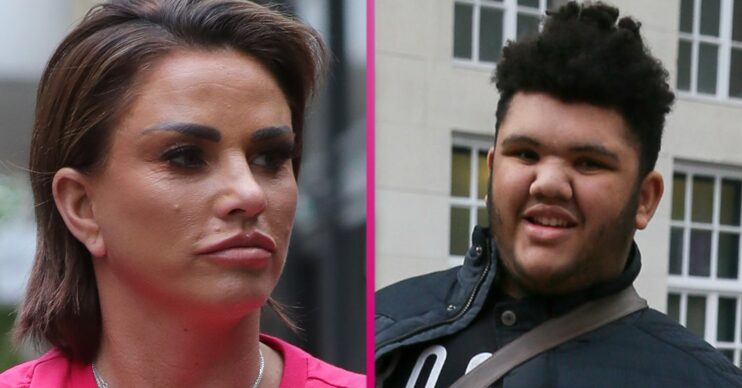 She's such a brilliant mum

Katie Price has revealed that son Harvey has smashed massive holes in the walls of his new home.

Harvey, 19, moved into his new home at the beginning of the year.

And it is conveniently just across the home from Katie’s current house.

But on a house tour, Katie explained how Harvey has taken out his frustration on some of the walls.

Harvey has Prader-Willi syndrome, is partially blind and on the autism spectrum.

As they toured the kitchen, Katie pointed at several spots of broken plaster on the wall.

Katie said: “This is the start of what Harvey does.

“He dents it so bad that you can see this stuff [insulation foam] behind the wall.”

The mum-of-five then showed further damage to the wall at the bottom of the staircase.

She continued: “It looks like he rugby-tackled the wall here.”

Additional damage was then revealed in the downstairs bathroom and the hallway.

The living room also showed severe damage, with a gaping hole by the window.

While demonstrating the damage, Katie said: “He’s done it so much. That you can see the pipes.

“And he keeps going for it. So I’ve got to get these fixed or he is going to pull these pipes out.”

Why does Harvey punch walls?

He heartbreakingly replied: “I hate it when mummy goes.”

Katie responded: “Is it because you want your mum with you all the time that you do all this?”

The former glamour model continued to explain that he’d also smashed two televisions and iPads since moving in.

She even said she hopes social services see the footage, and offer more help for the care of her son.

She explained: “I need help… this isn’t normal behaviour. No one understands.

“But I’m showing this to you guys to show what it’s like with Harvey.

“He is in a good mood – but then when he kicks off – this is what happens.”

Upstairs she said that sometimes Harvey smears his faeces on the bathroom walls. And often wets the bed.

Dozens of Katie’s fans gushed over what a dedicated and resilient mum she is.

Over in the YouTube comments, one user wrote: “I don’t care what anyone thinks about Katie, she’s a brilliant mum to Harvey, it must be so hard. He’s blessed to have a mum like her a lot of women would have given him up.”

While another user praised: “He’s such a young man Katie. His independence with all his setbacks is nothing short of incredible. It brings tears to my eyes. You should be so proud of yourself. X”

And a third user raved: “Can’t even begin to imagine how hard it is to care for a child with special needs, my heart goes out to each and every parent who experiences this. Always loved Katie she’s a brilliant mum x.”