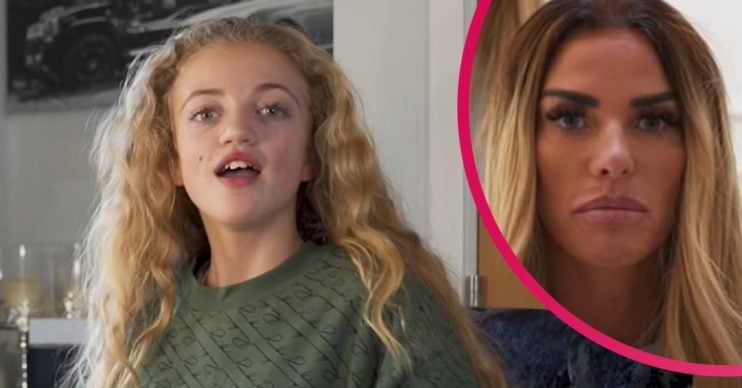 The teenager reportedly live-streamed herself having fun

Princess, daughter of Katie Price and Peter Andre, has reportedly hit back on social media after coming under fire for going to a friend’s house.

According to reports, the 13 year old went to visit her pal Tiana Harris and the two of them hung out and made a cake.

Princess, daughter of Katie Price and Peter Andre, ‘hits back at haters’

The Daily Star reported that the two friends streamed themselves having fun on Instagram, which prompted followers to question why they were together.

Under current COVID guidelines, two households are allowed to mix in England, but only outdoors.

Read more: Katie Price takes swipe at Loose Women as she admits she ‘performed like a seal’

Mixing indoors is allowed for those who live alone or are part of a support bubble.

According to the Daily Star, Princess noticed negative messages in the live stream’s comments and hit back: “OMG these people. Some people really hate on kids’ life.

“Let them hate you know, it doesn’t effect us.”

We literally tested ourselves this morning and we both tested negative.

She also told fans: “Guys… we are negative.

“We literally tested ourselves this morning and we both tested negative. So if you are going to hate, then… guys basically we [can] mix households.”

The newspaper reported that Carl Woods commented on the stream, telling the pair to go to bed as it was late, as did mum Katie.

In other Katie Price news, the former glamour model recently revealed she had undergone her 12th boob job.

Mum-of-five Katie, 42, said he had the procedure done after a previous op left her “deformed”.

Speaking to The Sun, the star said she felt her breasts looked “absolutely awful”.

She said: “I had my boobs done in Turkey and they looked deformed, they were absolutely awful.

“That’s the first time I’ve gone to a different surgeon. I had to go back to [my former specialist] Frank with my head down, ashamed that I’d been to another clinic.”

“I did it when I came out of the Priory – they’re just so much better – I didn’t get an infection or anything.”

Do you follow Princess, daughter of Katie Price and Peter Andre, on social media? Leave us a comment on our Facebook page @EntertainmentDailyFix and let us know.