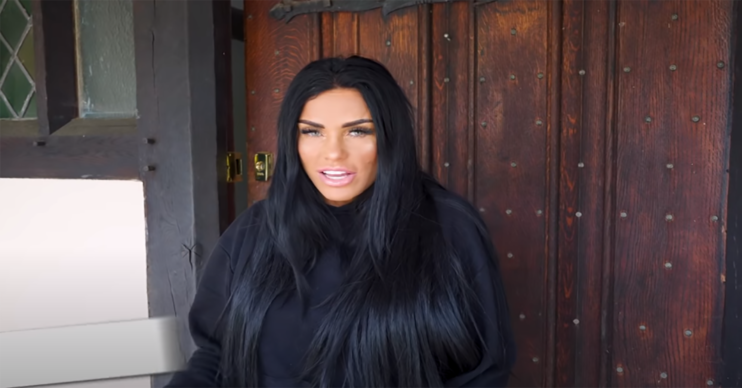 TV’s Katie Price has vowed never to return to her “mucky mansion” again after giving fans a tour inside the empty property.

The reality star purchased the three-storey home in Sussex for £1.3 million in 2014, but now admits she “absolutely hates” it in her latest YouTube video.

The six minute video kicks off with Katie, 42, at the huge wooden doors of the mansion, having returned to the property to collect some last remaining items.

She said: “Welcome to my old house. I absolutely hate this house. So let’s make this quick as I can’t stick being here too long.”

What’s in the house?

Despite looking a little run down, the home still features a glistening chandelier fixture and a number of her accolades.

While in the kitchen, Katie showed off her I’m A Celeb jungle bag which had been purposely placed in the middle of the floor.

She ended the tour with a glimpse of her old collectables, including a mug from her former glamour modelling days and her autobiographies.

Fans begged Katie for a part two of the tour in the comments section, with one saying: “Omg six mins I need more part two please.”

Another added: “If I had one bad thing to say about your vlogs it is that they are too short.”

A third commented: “You’re brilliant Katie and you deserve each and every award you have!!! Bless you Katie!!!”

Why is it named the ‘mucky’ mansion?

The property, which Katie has since renamed ‘Priceywood’, first came under fire following an appearance on ITV show Through The Keyhole.

Following years of work, the house was branded the “mucky mansion”.

Katie previously showcased the extent of the mess on her reality show My Crazy Life.

Nobody will ever dull my sparkle ✨

She has since moved out completely and is currently isolating at a friend’s home, which is just down the road from her ex Peter Andre.

Katie and Peter are parents to Junior, 14, and his younger sister Princess, 12.

Meanwhile, her ex Kieran Hayler is on dad duty for their two children, Jett, six, and Bunny, five, during lockdown.

The reality star is also a mum to 18-year-old son Harvey, who she shares with footballer Dwight Yorke.