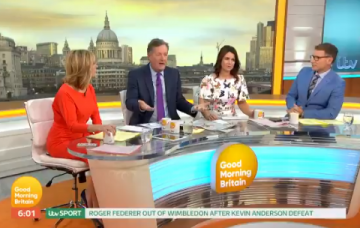 Kate Garraway ‘in talks for’ I’m A Celebrity…

Reportedly up for the challenge!

Good Morning Britain’s Kate Garraway could join the ranks of many famous ITV faces to become a campmate on I’m A Celebrity… Get Me Out Of Here!

According to The Sun, the anchor is in talks to sign up for this autumn’s series.

“Kate has been approached by show producers because they know she would be TV gold,” their source says.

“Kate has always been relatable and game for a challenge but since entering her fifties she’s embracing all aspects of life and sees the Aussie jungle as the ultimate life test.

“She’s in great shape at the minute too so wouldn’t have any qualm about stripping off in a bikini and would be flying the flag for the more mature lady.

This week, it was confirmed that Ant McPartlin WILL be replaced as co-host of the 2018 run, alongside Dec Donnelly.

Earlier this summer, Ant revealed that he would be missing the latest series, while he concentrates on his health.

This week ITV’s director of television Kevin Lygo told the Edinburgh TV Festival that a replacement had already been found, but he declined to reveal who it would be.

The Mirror claims that Holly Willoughby has secretly signed up to host with her old pal Dec, and will be taking her three children to Australia for the four-week duration of the show.

But an ITV rep for the series has refused to confirm who will take over, stating that an announcement will be made in due course.

Who would you like to see among the campmates this year? Leave us a comment on our Facebook page @EntertainmentDailyFix and let us know what you think!