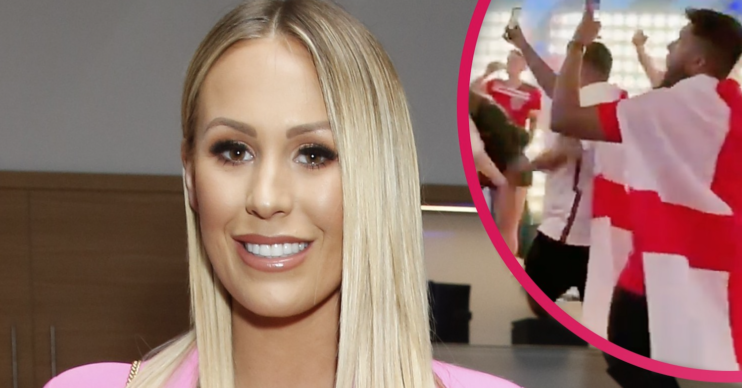 A lucky escape for Kate and her family

Kate Ferdinand has revealed on Instagram that she and her family were almost trampled during the Euro 2020 final carnage at Wembley.

Kate shared an image in the social media site, which showed stepson Lorenz and her dad in the stands.

She said: “Last night I was lucky enough to go to Wembley with Lorenz & my dad.

“I’ve wanted to watch a football match with the boys for so long, it was well worth the wait.

“We kept ourselves safe & had so much fun.”

However, the next snippet of video showed Kate and her family in a much more perilous position.

What happened to Kate before the game?

The occasion – England’s first major final since 1966 – turned sour when groups of fans who did not have tickets stormed the barricades and forced themselves into the stadium.

This caused chaos and violent scenes as stewards tried to keep the unruly crowds at bay.

Showing she and her family walking down Wembley Way before the game, Kate revealed that they narrowly missed all the chaos and carnage.

“Although we had fun we narrowly missed 100s of people storming the gates and bashing down trying to get through the turnstiles, trampling people in their way,” she said.

What did Kate say about the racist abuse?

Kate also commented on the vile online abuse some of the England team attracted after they lost the game.

Racist trolls abused Marcus Rashford, Jadon Sancho and Bukayo Saka after they all missed in the dreaded penalty shoot-out.

Joining society’s widespread condemnation, Kate said: “I don’t even know where to start, but I just can’t get this situation out of my head.

“The same fans cheering everyone on are being racist the minute we lose.

“It’s just disgusting. Proud of the England team, but not proud to be English right now.”