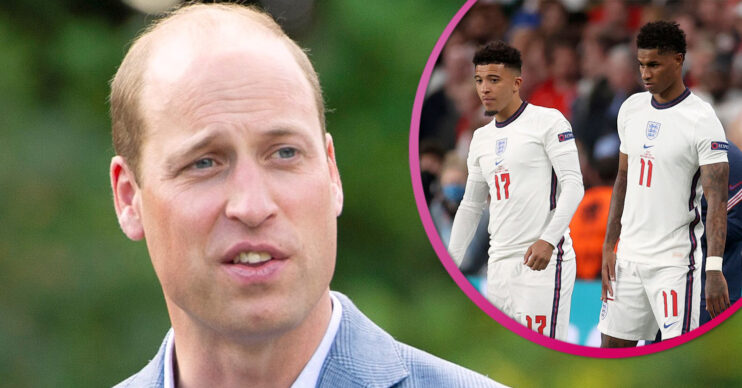 The Duke of Cambridge called for action

Prince William has taken to Twitter to slam the racist abuse directed at England players after last night’s Euro 2020 final.

The three players had missed penalties and became targeted on social media.

A string of famous faces have spoken out to call for action against the trolls, including the Duke of Cambridge.

William wrote: “I am sickened by the racist abuse aimed at England players after last night’s match.

“It is totally unacceptable that players have to endure this abhorrent behaviour.

I am sickened by the racist abuse aimed at England players after last night’s match.

It is totally unacceptable that players have to endure this abhorrent behaviour.

It must stop now and all those involved should be held accountable. W

“It must stop now and all those involved should be held accountable. W.”

One person said: “Another example of why you will make an exemplary King!

“Bravo HRH The Duke of Cambridge!”

Another tweeted: “Well said Sir. You echo the feelings of the vast vast majority of this country.”

After that, a third added: “Thank you for posting this William. It is utterly disgusting.”

The FA hits out

The statement said: “We could not be clearer that anyone behind such disgusting behaviour is not welcome in following the team…

“…we will do all we can to support the players affected while urging the toughest punishments possible for anyone responsible.

“…but we implore government to act quickly and bring in the appropriate legislation so this abuse has real life consequences.”

It added: “Social media companies need to step up and take accountability and action to ban abusers from their platforms…

“…gather evidence that can lead to prosecution and support making their platforms free from this type of abhorrent abuse.”

Prime Minister Boris Johnson tweeted: “This England team deserve to be lauded as heroes, not racially abused on social media.

What did Gareth Southgate say?

He said in a press conference today: “It’s just not what we stand for.

“We have been a beacon of light in bringing people together, in people being able to relate to the national team…

“…and the national team stands for everybody, and so that togetherness has to continue.”