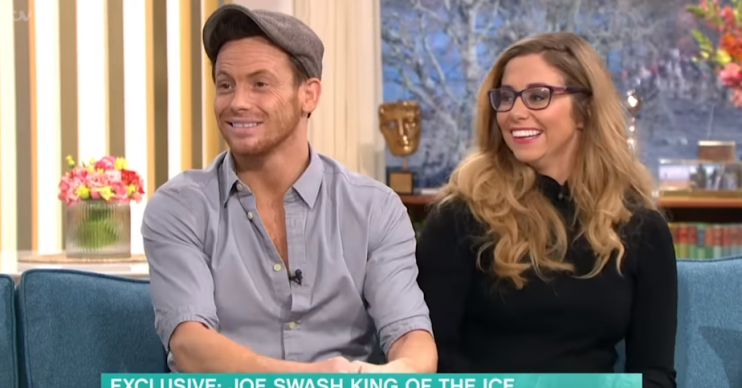 Joe Swash lost the Dancing On Ice trophy after being crowned the winner of the skating show on Sunday night.

The 38-year-old actor and his professional partner Alex Murphy were awarded the coveted prize thanks to the voting public, after beating fellow finalists from Libby Clegg and runner-up Perri Kiely.

The pair were presented with the unique trophy by hosts Phillip Schofield and Holly Willoughby but Joe misplaced it at the wrap party and couldn’t find it anywhere.

Luckily for Joe and Alex, the trophy was discovered under a table and is now safe with ITV producers but due to his carelessness Joe doesn’t think he’ll be allowed to take it home.

During an appearance on Monday’s This Morning – which is presented by Phillip and Holly – Joe confessed: “We have been told someone has found it under the table.

We have been told someone has found it under the table.

“I don’t what happened to it. I don’t think they will let us have it afterwards.”

Joe also revealed he couldn’t have got to the final without the support of Libby – who is a Scottish Paralympic sprinter who is registered blind – and Perri because they supported him at every stage of the competition.

The former EastEnders star said: “It’s been the craziest journey, it’s been so long, I think we’ve been doing it since September.

'I'm gonna be one of them dads at Christmas, chucking out some Bolero moves!'@realjoeswash will return to the ice… after he's let his skates air out! ⛸ pic.twitter.com/4GEKmA9f59

“I can remember spending days and days just trying to push off straight, it’s all a bit surreal to be honest.

“I couldn’t have got that far without them two. Whenever I had a judges challenge or something I thought I couldn’t do I just remembered Libby was there and Libby can’t see, and she never moaned about anything.

“She was my inspiration. Perri is an old head on young shoulders, he’s so mature and he’s got such a great soul.

“Even though I was old enough to be his dad when I would go through my problems he’d say, ‘Joe this is what I think you should do.’

“They really helped me I was just glad to be in the final with them.”

Many viewers were thrilled to see Joe win and shared their thoughts on Twitter.

One person said on Twitter: “Well done @realjoeswash it was very much deserved, you were by far the most improved skater, taking nothing away from Perri but Joe deserved.”

Another wrote: “Joe Swash has had no dance background, no idea or practice on how to balance or trick or lift at all. To have his journey was beyond me! Well done, truly deserved!”