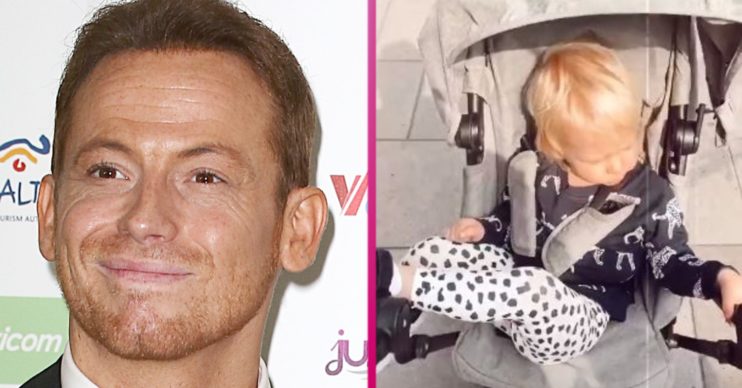 Joe Swash joked Rex is ‘too cool’ as he posted an adorable new video of his son.

The Celebrity Gogglebox star, 38, laughed as his 15-month-old – whom he shares with Loose Women favourite Stacey Solomon – struck a ‘chilling’ pose in his pushchair.

What did Joe Swash post about his son Rex?

On his Instagram Stories, Joe uploaded pictures and clips with his fans as he enjoyed a quiet morning with Rex.

In one short video, the dad of two strolls down a street while Rex looks happy in his pushchair.

Joe wrote over the clip, “This kid is too cool” along with a sunglasses emoji.

Rexy really is the cutest kid I’ve ever seen.

Hilariously, Joe’s youngest son is sitting looking super relaxed, legs crossed and both feet resting up on the frame of the buggy.

Earlier on his Stories, Joe shared a cute picture of the two of them at home. Rex sits next to Joe and smiles as he holds a Thomas the Tank Engine toy.

He posted another to his Instagram profile. One fan commented: “He is gorgeous and is always happy.”

Heres looking at you kid❤️

Another said: “Rexy really is the cutest kid I’ve ever seen.”

Read more: Joe Swash tells Stacey Solomon off for treating him ‘like a dog’

Joe has another son, 13-year-old Harry, from a previous relationship.

Just recently, the former I’m A Celebrity Extra Camp host opened up about a court battle over his son.

He said he feels “sorry” for Harry that he had to “do a lot of adapting”.

Speaking on the podcast Step Life, Joe said: “It’s just one of those things. His mum and I weren’t agreeing on certain things and we had to go to court.”