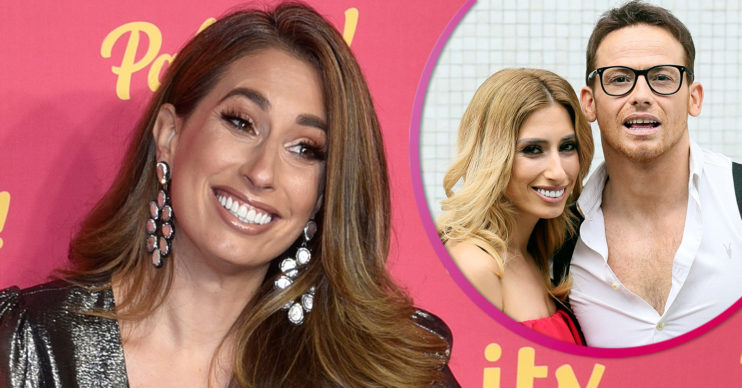 The Loose Women star has officially waved goodbye to summer

Stacey Solomon has bid farewell to summer as she showcased her incredible front door display with Joe Swash and son Rex.

The 30-year-old Loose Women star posed with her loved ones outside her home in Essex yesterday (September 7).

But it was Stacey’s “summer door” that really got fans talking as the trio stood beneath the huge flower arch.

In the snap, Stacey is seen flashing a huge grin as Joe holds one-year-old Rex.

The TV star wrote: “Bye Bye Summer. Rex’s arm. I had to put a picture up of us by the summer door… Now that they’re back at school it feels like summer has officially ended.

I had to put a picture up of us by the summer door… now that they’re back at school it feels like summer has officially ended.

“It seems like it’s flown by but at the same time it’s been the longest summer ever and I can’t believe we haven’t had one picture outside the summer door and it’ll soon be swapped back to autumn.

“I hope you’re all OK. I hope if your pickles have gone back to school or are going back soon that they’ve settle back OK and that you’re not feeling lost. You smashed lock down and all of the uncertainty these last few months. Keep going.”

She added: “You’re doing such a good job I promise. Love you to the moon and back.

“The big pickles didn’t fancy being in the pink flower picture, they wanted to take it instead.”

Stacey’s celebrity pals rushed to comment, with Davina McCall writing: “Love you, thank you for all the beautiful things you say Stacey. You melt us all with your gorgeous family and your huge heart love you.”

Read more: Joe Swash tells Stacey Solomon off for treating him ‘like a dog’

While fans were left stunned by the picturesque floral arch.

One gushed: “Do you do this for every season? It looks AMAZING.”

Another commented: “Oh wow, that is incredible! You absolutely smashed summer with your boys, your stories have just been so amazing to watch, thank you! Hello Autumn….”

Stacey’s post comes days after the star ditched her phone for the sake of her mental health.

She wrote: “Zoe Sugg has organised a technology/social media free weekend this weekend to encourage people to switch off.

“She did some research and found that lots of us really struggle to switch off and it has a massive impact on our mental health.”

Stacey continued: “So I’m going to join in because I feel so strongly about looking after our mental health.

“I always have a phone in a drawer day every week anyway because I think it is so important… So this weekend I’m proud and happy to be doing it for a very special reason.”

It’s not the first time Stacey has put a temporary social media ban on herself.

The star occasionally takes a break to spend time with her family and to switch off from trolls.