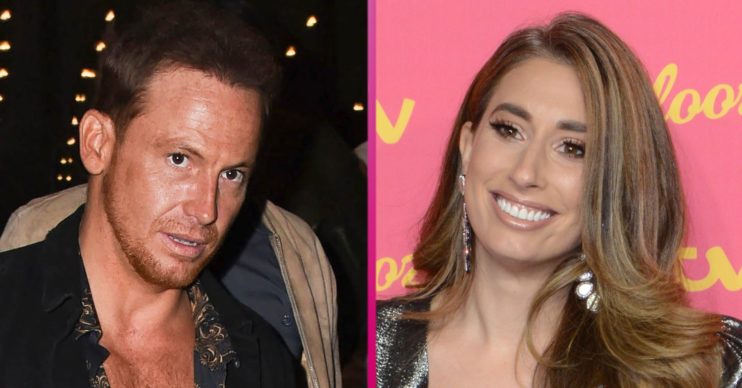 Joe Swash has accused Stacey Solomon of treating him ‘like a dog’ after returning home from a busy day at work.

Stacey, 30, was so delighted to see her man that she filmed an Instagram story of herself rubbing his face vigorously.

The Loose Women star grinned as she ‘petted’ Joe and told her followers: “He’s baaaack, wooo!”

But 38-year-old Joe wasn’t entirely sure of her affectionate gesture, telling her: “What’s your problem? I’m not a dog!”

As Stacey wished her fans a goodnight, Joe then got his own back. The former EastEnders star returned the favour in her face as they both laughed.

Why is Stacey Solomon quitting social media for the weekend?

Stacey posted her video late on Friday night and confirmed it would be the last one from her until Monday.

The mum-of-three often pops her phone in a drawer for the day but she is taking a break from social media for even longer this time.

While sharing a clip of herself running a bath, Stacey revealed that she is ditching Instagram for the entire weekend.

YouTuber and influencer Zoe Sugg came up with the idea, which will raise money for mental health charities.

Read more: Gemma Collins tells fans not to ‘waste their lives on social media’ and help animals instead

Stacey said: “I feel so strongly about looking after our mental health. I always have a phone in a drawer day ever week because I think it’s so important.”

Why did Stacey defend Gemma Atkinson?

Meanwhile, only this week, Stacey was forced to defend Hollyoaks and former Strictly Come Dancing star Gemma Atkinson after she was trolled on social media.

Gemma had shared a video of herself working out alongside her baby daughter Mia but found herself coming under attack.

I feel so strongly about looking after our mental health. I always have a phone in a drawer day ever week because I think it’s so important

The actress – who is in a relationship with Strictly pro Gorka Marquez – shared a message she had received, which name checked Stacey.

It read: “If this woman isn’t in the gym being distracted, her flaming dog are all over the place. People like her really make me mad. The children are the last thing they think about.

“Children of Mia’s age are a 24/7 – please take a leaf out of Stacey Solomon’s book or look at her Instagram. Rex and her other boys always come first.”

Clearly horrified, Stacey was quick to jump to Gemma’s defence and hit back in her own Instagram story.

“Some days I choose Peaky Blinders over Peppa Pig, crisps over carrots and sometimes I lock myself in the toilet and pretend I’m doing the longest poo in the world just to get some me time.”

Addressing Gemma, she added: “Gemma, you’re smashing it. Keep being an amazing mummy to that beautiful woman you are raising.

“Hold your head high and take no notice of anyone who tries to drag you down.”