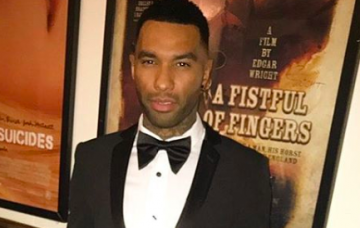 Their reps have issued a statement

This weekend, a new report claimed Celebrity Big Brother star Jermaine Pennant had separated from his wife, Alice Goodwin – with insiders claiming they’ve already deleted all traces of each other online.

But ED! can now confirm the pair are still together, with the glamour model blasting it as a “rubbish non-story.”

According to reports at The Mirror, Jermaine and Alice split at Christmas and are no longer wearing their wedding rings in pictures.

They also claimed Alice and the former England footballer had deleted all traces of their marriage on Instagram.

But a spokesperson insists to ED!: “Jermaine & Alice are still together.”

Alice, 33, also took to Instagram on Monday to moan about a pap following her around and wrote: “I hope you got a good shot of the hole in my pants. Maybe you could focus on that instead of your rubbish non-story about my marriage.”

The pair, who married in 2014, have a had a rough past year, after “love rat” Jermaine appeared on the final series of the Channel 5 reality show.

During his stint, a lot of viewers were shocked by Jermaine’s flirty behaviour with fellow contestant Chloe Ayling – when he even lied about being married.

After their eviction, Jermaine and Chloe, 21, were rumoured to have spent the night together at a hotel, but the controversial sports star later appeared on The Jeremy Kyle Show in October, to prove he was working on his marriage.

The former England footballer’s wife joined him on the talk show, admitting she was upset with her husband’s behaviour. But things ended dramatically, when Jermaine was so infuriated over Jeremy’s suggestion he take a lie detector test, he ended up storming off the set.

Despite the tension, the couple said they were renewing their wedding vows in Dubai last year and were even trying for a baby.

Are you surprised to hear this? Leave us a comment on our Facebook page @EntertainmentDailyFix and let us know what you think.