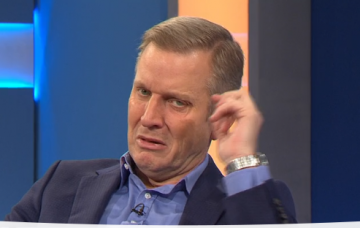 It's said to be "explosive" and "powerful"

Jermaine Pennant will apparently be quizzed by Jeremy Kyle on his talk show in an “explosive” interview shown next week.

According to The Sun, the Celebrity Big Brother star will be grilled on his marriage to wife Alice Goodwin and his ‘flirty’ display towards model Chloe Ayling on the reality show over the summer.

It’s been said the former Arsenal and Liverpool footballer and his wife were filmed for a celebrity edition of The Jeremy Kyle Show in Manchester on Thursday.

An insider told the publication: “It was explosive stuff, especially when pictures of Chloe Ayling kept flashing up on the screen.

“Jeremy quizzed Jermaine on his ‘womanising’ and really went in on him.

“Alice really came out as the star of the show –  the way she handled the questions on their on-off marriage and why she chose to stay with Jermaine.”

The source claims the interview is “powerful” and host Jeremy “had a lot of respect for [Alice] for the way she handled herself” on the show.

ED! has contacted representatives for Jermaine and The Jeremy Kyle Show for comment.

Jermaine got people talking during his stint in the Celebrity Big Brother house for his ‘banter’ with Chloe, 21.

The pair were seen on camera writing secret notes to one another using eyeliner, with Jermaine telling Chloe “I like you” on one.

Jermaine also planted a kiss on Chloe’s inner thigh during a game of truth or dare in the house.

However, Jermaine called their flirty antics “just banter” claiming “everyone [in the house] knew” he had a wife and he made it clear from the moment he entered the house.

During her exit interview, Chloe was left fuming after discovering he was married, claiming she didn’t know.

After branding him “disgusting” during her exit chat, Chloe told The Sun last month: “When I found out he was married I was speechless and shocked.

“I couldn’t understand how someone could confess on national TV that they like another girl, spend the whole time flirting with them and even share a bed.

“This led a young girl on and completely disrespected his wife, making me realise he didn’t care about anyone’s feelings.”

Since leaving the house, Jermaine has apologised to his wife Alice and is determined to make their marriage work.

It’s been reported that he even asked Alice to marry him again and make a fresh start.