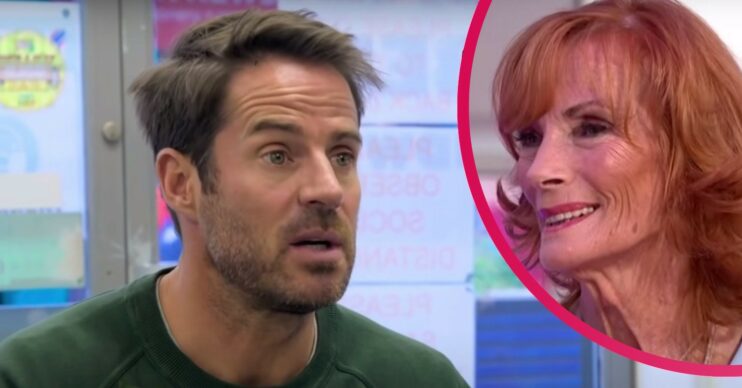 Jamie Redknapp has told his mum Sandra Redknapp off for sharing a sweet snap of him and his baby son, Raphael.

The photo of the 48-year-old footballer was taken during his visit to have lunch with his parents on Christmas Day.

Jamie, along with his wife Frida, new baby Raphael and his eldest sons, Beau and Charley, had Christmas dinner this year with his parents, Sandra and Harry Redknapp.

Sandra took the opportunity during Jamie’s visit to take a quick snap of her son with her new grandson.

In the photo, Jamie grins as he cradles Raphael, who clutches onto his father’s finger with his tiny hand.

Sandra’s caption was short and sweet. The 73-year-old posted three red love hearts alongside the photo.

Heartwarming though the photo was, Jamie was not happy. He jokingly told his mum off in the comments for taking a photo of him after he’d had too much wine.

“Mum please ask for permission to put pics up in future that was after a lot of [wine emoji] and not sure Raphael is too happy with it either,” he wrote.

What did fans and followers say?

They flooded Sandra’s comment section as they drew comparisons between Raphael and his grandad, Harry.

“Definitely looks like his grandad in this picture,” another said.

“Looks like his Grandad but much cuter,” a third wrote.

Other fans defended Sandra after Jamie jokingly told her off.

“That’s a Mums privilege to post her pics,” one said.

“Ha ha so all sons are the same,” another laughed. ” mum why did you put that photo up !! cause mums can and it’s a lovely photo.”

Jamie’s Christmas was well documented thanks to the pictures and videos he posted on Instagram throughout the festive weekend.

One of Jamie’s posts is a collection of pictures of Raphael enjoying his first Christmas with the Redknapps. In the first photo, Jamie, Frida, and Raphael are sat on a sofa next to Santa Claus.

In other photos, Jamie and his sons can be seen cradling Raphael as they sit around the dinner table having Christmas lunch. Another sweet snap shows Sandra gazing lovingly down at her grandson as she holds him.

What did you think of Sandra’s picture of Jamie and Raphael? Leave us a comment on our Facebook page @EntertainmentDailyFix and let us know.