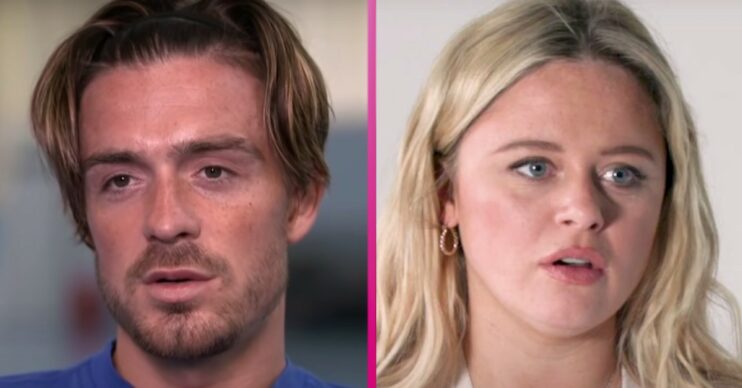 Sasha Attwood is his on-off girlfriend of 10 years

Jack Grealish has reportedly found himself in something of a love triangle with on-off girlfriend Sasha Attwood and Emily Atack.

The Mail on Sunday reports the footballer, 26, is “besotted” with Inbetweeners actress Emily, 31.

However, the publication indicates Emily won’t “hang around” for him if Jack sticks with his girlfriend of a decade.

According to reports, the Manchester City midfielder and TV personality Emily have been on secret dates together.

Sources have claimed she likes the £100 million sports star – but believed he was single when they met.

An England player colleague of Jack reportedly introduced him to Emily.

However, the tabloid indicates Emily presumed he was no longer in a relationship after allegedly seeing him on dating app Raya.

A friend of Emily’s told the tabloid: “Jack is besotted with Emily… she really likes him too – otherwise, of course, she wouldn’t have met up with him.

“She did also think he was single – it is what you expect if you see someone on a site looking for a girlfriend.”

The unidentified pal went on to suggest the ball is in Jack’s court.

However, Emily will apparently move on if he intends to maintain his relationship with Sasha.

They continued: “Emily has really enjoyed his company recently, but she certainly isn’t going to hang around if he stays with his girlfriend. She will happily get on with her life if that’s what he wants to do. It’s up to him now.”

ED! has contacted representatives for both Emily and Jack for comment.

The Mail also claims model Sasha is “devastated” following reports about her on-off boyfriend and Emily.

The 25-year-old reportedly only found out about newspaper claims after the England game against Albania on Friday (November 12).

She was in attendance for the match at Wembley Stadium and spent the day with goalkeeper Jordan Pickford’s wife Megan Davison.

Jack and Sasha first met as teenagers at school in Solihull.