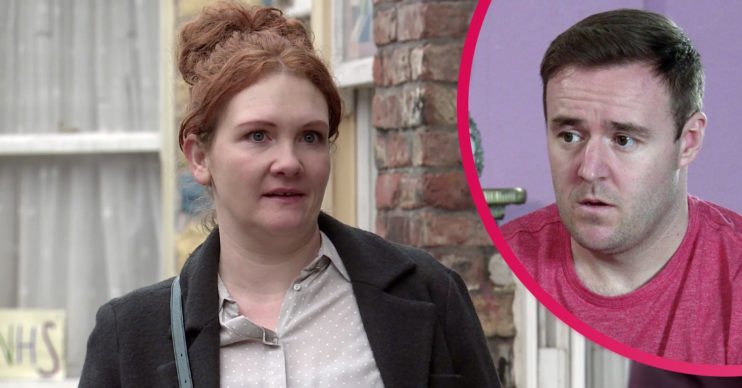 Is Fiz leaving Coronation Street after being humiliated by Tyrone and Alina?

Will they be able to fix their relationship?

Is Fiz leaving Coronation Street? Fiz has been in the ITV soap since 2001, but could she be leaving after discovering Tyrone and Alina’s kiss?

Over the last few weeks, Tyrone and Alina have been spending more time together and growing closer.

However last week, Alina confessed her feelings for the mechanic and the two shared a kiss.

But in last night’s episodes (Monday, March 22) Fiz surprised Tyrone telling him she had booked them a Greek wedding.

Tyrone was stunned and could only stare at Fiz, leaving her humiliated. Back at home, he admitted that he shared a kiss with Alina.

But he wanted to make things right and told Fiz that she and the girls meant everything to him.

Meanwhile, Alina found out about the wedding and the fact it wasn’t going ahead. She was desperate to find out if Tyrone felt the same way but when she saw him and Fiz, she was devastated.

But what will happen for next for Fiz and Tyrone?

Jennie McAlpine has played Fiz for 20 years this April. Although Tyrone has broke her heart, it looks like she will be staying on the cobbles.

Later this week, Fiz confronts Alina, warning her to keep away from Tyrone, leaving her shaken and upset.

Alina then tears a strip off Tyrone for telling his fiancée about their moment and orders him to keep away from her.

Later Fiz is upset when Sally makes a dig about Alina but Chesney assures Fiz that Tyrone’s indiscretion will soon be yesterday’s news.

Soon Fiz organises a date for Tyrone but when he cancels because he has to work late she takes food to the garage. But they both know she’s just checking up on him.

Next week, Tyrone tells Fiz that if they’re going to have any future together then she needs to forgive him.

Fiz tells Tyrone that she wants them to work things out but there’s something he needs to do first.

Tyrone goes to see Alina and tells her for the sake of his family she needs to move away. But will she do it?