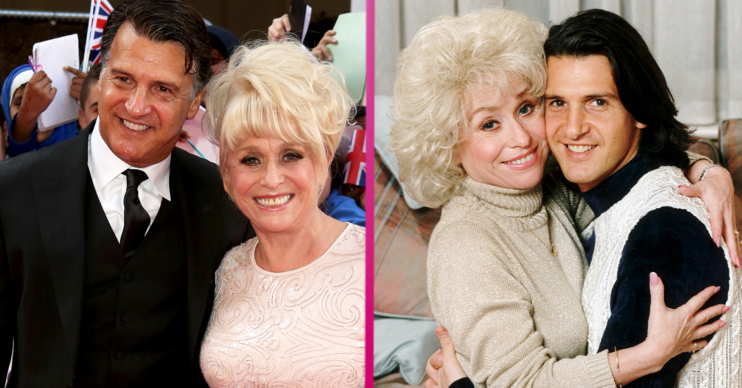 Theirs was a love story that spanned the decades

Scott Mitchell, the husband of Dame Barbara Windsor, has revealed the acting icon has died at the age of 83.

Barbara passed away at her London care home with devoted Scott by her side.

She was diagnosed with Alzheimer’s six years ago and had bravely battled the disease with “dignity”, he said.

But how did Barbara Windsor meet Scott, who was 27 years her junior?

She was friends with Scott’s parents and he offered to pick her up and drive her to a dinner at their house.

In her autobiography, All Of Me: An Extraordinary Life, she recalled telling him: “You’re a very smart young man.”

She was still married to second husband Stephen Hollings at the time. However, she insisted Scott was no more than a friend.

“A charming, intelligent and attractive friend, admittedly,” she quipped.

After their marriage hit the rocks, she went for dinner with Scott and the rest, as they say, is history.

The couple are said to have dated for eight years before their marriage.

When did Barbara Windsor and husband Scott get married?

Barbara and Stephen were granted their divorce in 1995 and, five years later in 2000, the former EastEnders actress married Scott.

They married in secret at London’s Dorchester Hotel and had just three witnesses.

Dame Barbara was apparently so happy that she couldn’t stop crying tears of joy.

At the time of their wedding Barbara was aged 63 and Scott was 36.

At the time, many thought Scott was a gold digger.

However, that was far from the truth.

He once revealed: “Little did they know that after the breakdown of Bar’s second marriage, she was £1 million in debt and we were talking about her coming to live in my two-bed flat.”

Was their age gap a problem?

On their age gap, Barbara admitted that they had discussed it, but it simply wasn’t a problem for them.

She wrote in her autobiography: “We did discuss the age gap, but agreed it would be more of a problem for other people than for us.”

We did discuss the age gap, but agreed it would be more of a problem for other people than for us.

Indeed, the couple’s marriage stood the test of time, with Scott by his wife’s side as she passed away last night (December 10).

What did Scott’s statement say?

“Her passing was from Alzheimer’s/dementia and Barbara eventually died peacefully and I spent the last seven days by her side,” Scott revealed.

He added: “I will always be immensely proud of Barbara’s courage, dignity and generosity dealing with her own illness and still trying to help others by raising awareness for as long as she could.”

Pay your respects to Barbara on our Facebook page @EntertainmentDailyFix.