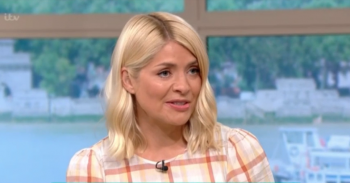 Holly Willoughby mocked for ‘tea towel’ outfit on This Morning

Others loved the look!

Holly Willoughby has been mocked by This Morning fans for her choice of outfit for Wednesday’s show.

The presenter wore an £85 orange and white checkered dress from & Other Stories for the daytime show with a pair of nude heels from Gianvito Rossi.

But some fans compared Holly’s dress to a “tea towel” and a “table cloth” and were quick to jokingly mock the star.

One fan commented: “Sorry Holly, you just look look like a table cloth.”

Another wrote: “Looks like a table cloth,” while a third said: “Willoughby can even make a tea towel look good.”

Others loved the dress, with one gushing: “Really beautiful dress!”

Another said: “Very pretty Holly,” while a third commented: “Ah the beauty just gets better and better.”

Earlier this week, Holly suffered an awkward blunder on This Morning as she told viewers that the show was starting at 11:30 am instead of the usual time of 10:30.

Holly and co-star Phillip Schofield told viewers what was featuring on the show in a promo before the programme started.

Holly finished by saying: “And who is H? We’ll be asking Line of Duty star Rochenda Sandall when she joins us live at 11:30.”

Phil replied: “Has always… for nearly 200 years. What in the name of god woman?” to which Holly said: “How could I do that? As soon as I’d said that I knew, obviously!”

What did you think of Holly’s dress today? Leave us a comment on our Facebook page @EntertainmentDailyFix and let us know!