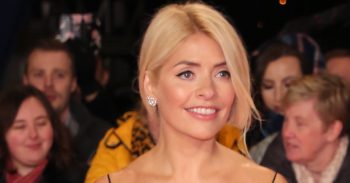 Holly Willoughby is back on This Morning after taking time off to enjoy a luxurious holiday in the Maldives.

The ITV favourite, 38, spent time in the island paradise with her three kids, sharing snaps of the enviable trip for her fans on social media.

Read more: Davina McCall and Holly Willoughby twerk and surf on holiday together

But she returned to work today (April 23rd), joining co-host Phillip Schofield on the sofa for interviews with axed Emmerdale star Shila Iqbal, Chaser Anne Hegerty and a woman who used the mystic power of asparagus to predict when the Royal Baby will arrive.

After hosting the show in a summery pink-and-white-patterned dress, Holly slipped into her gym gear for a rare dressed down look.

The presenter still looked stylish as she showed off her holiday glow in a pair of black leggings and a black T-shirt, with a dark denim jacket wrapped around her waist.

To complete the casual look, she sported a pair of Nike trainers and oversized sunnies.

It follows a post on Holly’s Instagram last week that showed the star dyeing her trademark blond locks at home.

The mum-of-three’s followers refused to believe she does it herself and took to the comments to tell her so, with some pointing out that a millionaire would obviously just go to a high-end salon and others skeptical because she went so long in the bathroom without being disturbed by her kids.

While Holly and Phil were away from This Morning, John Barrowman stood in to hold the fort, first with I’m A Celebrity pal Emily Atack and then The Saturdays singer Rochelle Humes. Speaking to The Sun ahead of his stint on the sofa, John said: “On Friday I hit it off with Emily [Atack] who I know like the back of my hand.

“I have only watched Rochelle on TV in a couple of things she’s done, so this is a new team-up for us. I won’t get to meet up with her until the day we go on air.”

John and Rochelle seemed to share a natural chemistry but their presenting style nevertheless divided fans of the show.

What do you think of Holly’s dressed-down look? Leave us a comment on our Facebook page @EntertainmentDailyFix and let us know.