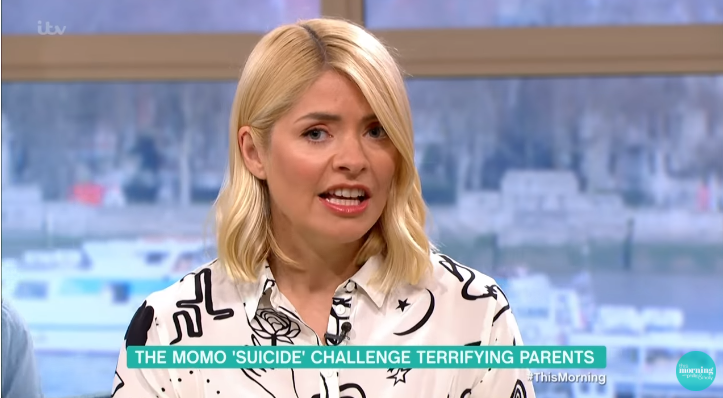 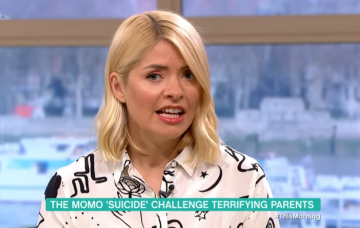 Holly Willoughby expresses fears for her son over Momo challenge

The scary image is sweeping the internet

Holly Willoughby has revealed her concerns for nine-year-old son, Harry, amidst the Momo challenge outcry.

Momo is a terrifying image of a doll-like figure with bulging eyes and scary grin that is reportedly popping up on the internet on platforms such as YouTube, WhatsApp and Facebook, targeting children by asking them to self-harm and commit violent acts.

Holly and co-host Phillip Schofield spoke about the issue on This Morning on Thursday (February 28) alongside child psychologist Anna Colton and one of their ‘Be Kind’ mums, Nicola Harteveld.

Whilst Anna insisted the key was not to panic about it and to teach children from a young age about internet safety, Holly opened up about her own worries.

“That’s my concern,” she said. “Harry is nine, he watches things on YouTube. I’ve been aware of [Momo] because I’ve seen it in the press, I didn’t quite understand how it works and that it just pops up on these things so it’s there all the time. Do I draw his attention to it? I’m a mum and I don’t know what to do?”

Anna responded: “It is difficult and everyone will have a different approach for their own children, but for me, it’s a bit like crossing the road – we train our kids from a really young age about the danger of the cars, ‘you can’t do it on your own, you have to hold your mum’s hand’, with internet safety you have to drip feed it like that.”

Anna replied: “It’s personal. I would probably say look there’s a bit of chat about a scary image, if you see it just don’t engage in it.”

But Holly still wasn’t reassured: “Is that going to make him Google it?”

Nicola then added to the conversation that that was her own fear if she didn’t address it and their school friends then started talking about it.

She explained that she’d told her kids “it was a virus and if they did see it it was going to delete their game data so they were terrified of using it.”

Holly read out the YouTube statement that had been released earlier in the day: “Contrary to press reports, we’ve not received any recent evidence of videos showing or promoting the Momo challenge on YouTube.

And she also read out a statement from messaging site WhatsApp: “WhatsApp cares deeply about the safety of our users, it’s easy to block any phone number or encourage users to report any problematic messages to us so we can take action.

“We have a machine learning system in place that ban accounts based on abusive behaviour and user reports.”

Phil then addressed reports Momo is all a big hoax: “Is there proof it actually exists?” he asked.

“From what I’ve seen, from my research there isn’t proof that this is directly linked to suicide. There is proof that there is a horrible face out there, there are videos of people watching it saying something to you in a scary voice.”

Anna added that her golden rule when she worked with kids was that “if an adult that you don’t know or an app says to you keep a secret that’s a red flag and it means go tell. Always.”

Are you worried about the Momo challenge? Leave us a comment on our Facebook page @EntertainmentDailyFix and let us know what you think.