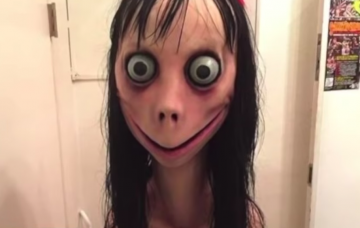 Her mother has revealed her horror

A girl aged just three yearsold is thought to be the youngest victim of the Momo challenge that has left parents concerned for their children’s welfare.

The image of Momo has been popping up on platforms including YouTube, Facebook and WhatsApp to target young children encouraging them to self-harm or even attempt suicide.

The unsettling image of a female doll-like figure with creepy bulging eyes and terrifying smile appears and then sends instructions and violent images.

The image is said to be in kids’ shows and games online including Peppa Pig and Fortnite.

And now a mother has revealed to the Mirror Online how her three-year-old daughter Adaline Becerra has been targeted.

When asked by her mum, Bianca, who Momo was, Adaline replied: “She looks at me with her eyes really big and says, ‘she is the scary lady with big eyes and black hair’.”

When Bianca questioned further Adaline revealed: “She wants your princess to hurt herself, she wants me to go in the garbage.”

She also said Momo wanted her to “jump from the high slide and hurt[herself]”.

Many parents have been posting online, urging others to beware the dangers.

Following our theme for the week on “Limiting Screen-Time”, my dear Mom-Friend @twiqa just sent tagged me on this viral video to inform other moms to be careful about what our Little Ones are watching!! . . This video shows a YouTube clip that recently pops up when kids are watching their normal cartoon shows on YouTube, it’s called #Momo. #Momo encourages a participant to complete various tasks if they want to avoid being “cursed.” Some of the tasks include self harm, which #Momo asks the participant to provide photographic evidence in order to continue the game. Ultimately, the game ends with #Momo telling the participant to take their own life and record it for social media. #MomoChallenge are hacking into children’s programmes. Challenges appear midway through #KidsYouTube, #Fortnight, #Peppapig to avoid detection by adults. . . Now more than ever, please limit and MONITOR “Screen Time” 🙏🏾🙏🏾🙌🏾🙌🏾 We’ll be sharing tips to help with this, over the next couple of posts – please turn on post notifications and tag your mom friends to see this too! . . . . #momlife #screentime #toddlers #momochallenge #momo #youtubekids #peppapig #momoftoddlers

The Mirror Online also reported a seven-year-old girl was left so terrified that she began banging her head on school walls.

Callie Astill has been having nightmares and refuses to go to the toilet alone after claiming the character came up on YouTube Kids, but she was scared to say anything believing her mum would come to harm if she did.

“She had her fingers in her ears, burst into tears and it took a long time to console her,” Callie’s mum, Victoria said of her daughter’s response when asked about Momo.

Celebrities have also waded in to urge parents to be vigilant with their kids’ online viewing habits.

I know I’m a massive KILLJOY and always banging on about children online and safety and the evils of the world. BUT have you heard about this? The MOMO CHALLENGE being imbedded into those cute videos your kids watch about slime, LOL dolls, kinder egg openings, minecraft videos etc. It’s awful, scary and frankly sick, but it’s real and happening. PLEASE I beg you don’t let your kids online unsupervised, look at what they are watching, make them be in the same room as you while they are online, limit their screen time. It’s one scary ass world our mini humans are growing up in. 🥺 #onlinesafety #internetnanny #momochallenge ***ALSO JUST TO POINT OUT THIS IS ON KIDS YOUTUBE TOO, just because it’s kids YouTube does NOT make it safe*****

Kim Kardashian has also posted to her Instagram Stories that she’s been in touch with YouTube asking them to help sort this craze out.

YouTube have responded to Kim’s plea saying they’re “on it”. YouTube had remained silent on the matter until yesterday (Wednesday February 27) when a spokesperson told the Daily Dot: “Contrary to press reports, we’ve not received any recent evidence of videos showing or promoting the Momo challenge on YouTube.

Have your kids been affected by the Momo challenge? Leave us a comment on our Facebook page @EntertainmentDailyFix and let us know.