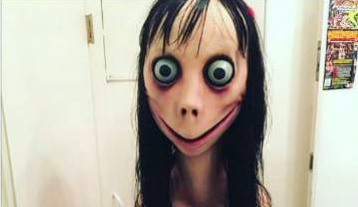 Letters are also apparently being sent home by schools

It’s a pretty terrifying image, and the story behind it is even scarier.

Police are warning parents over an image known as “Momo”, as criminals and cyber bullies use it to target young children – even encouraging them to self-harm or attempt suicide.

Officers in Northern Ireland have spoken out about what they call a “freaky looking creature”.

The weird image of a doll-like figure, with a creepy grin and bulging eyes has been used to contact young children on WhatsApp, Facebook and even youTube, where the person behind it then sends instructions and violent images.

“One video of such an interaction in America I’ve seen, shows an ominous-sounding voice recording being sent to a child telling them to take a knife to their own throat.

“Another threatens family if a ‘challenge’ is not completed. It’s chilling viewing. There are numerous variations and of course now imitators.”

Various horrifying stories have emerged this week around the Momo Challenge. One mum from Edinburgh, Lyn Dixon said her eight-year-old son had been contacted.

She said: “He showed me an image of the face on my phone and said that she had told him to go into the kitchen drawer and take out a knife and put it into his neck.

One woman spoke to The Mirror about how ‘Momo’ tried to befriend her six-year-old daughter.

In a video mum Brittany Roussell shared, little Bre-Andria from Louisiana in the US describes how Momo “could be in your dreams or she could kill you.”

She tells her mother: “When you come to her house, when she sends you the address… she’s gonna actually kill you. And I don’t want that to happen to me so make sure you all stay safe, OK?” The phenomenon has also been reportedly linked to the death of a 12-year-old girl in Argentina.

People have been flocking to Twitter to describe their horror over the new trend. One wrote: “This #MomoChallenge got me scared asffff.”

Another said: “My kids had nightmares after being told about it.” A third added: “If I see that damn face one more time I will never sleep again.” One more said: “I was terrified of Momo visiting me in my dreams last night, 100% regret looking at that face 😱😱😱.”

Another shared what they claimed to be the original video which features a small child’s voice singing: “Momo’s going to kill you, in the morning you’ll be dead.”

Others said it was being blown out of proportion, with one tweeting: “So many schools are now sending letters home to parents about Momo. Genuinely baffling, and far more children have ended up terrified now then they ever would’ve otherwise!”

A second reminded: “GUYS IT’S PRETEND.” And some even joked about it, writing: “Probably looks like me after a night out 🤔😂.” One more added: “I do have to ask how you got a photo of my ex wife.”

Guys, stop. Stop killing yourself just for a stupid internet challenges. If you're in trouble, feel free to open up with your family, or get some help by the authorities.

Just please stop it. You know better than that.#SuicidePrevention#MomoChallenge pic.twitter.com/THfgCG9JQr

According to The Independent, the image comes from an art exhibit in Japan, three years ago. The model was made by a special effects company called Link Factory.

What do you think of this shocking new trend? Leave us a comment on our Facebook page @EntertainmentDailyFix and let us know what you think.