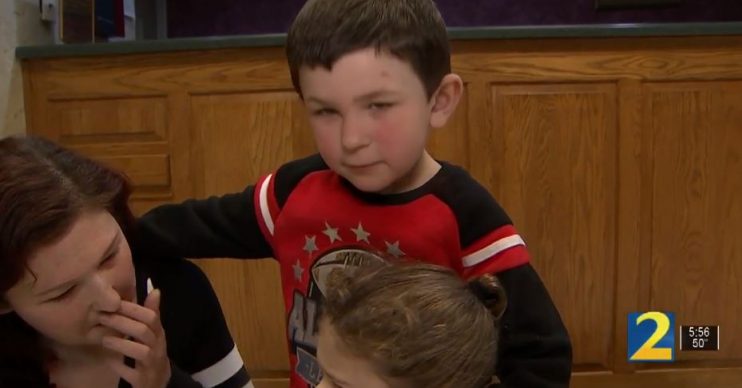 A five-year-old boy has been hailed a hero for pulling his toddler sister from their burning home and saving the rest of his family.

Noah Woods was reportedly able to save his little sister before rushing back to rescue the family dog and then alert his other relatives to the danger.

According to WSB-TV Atlanta, a fire broke out at the family of nine’s home in Kingston, a city in Bartow County, Georgia, on Sunday morning (February 9 2020).

The fire, which was later deemed to have been electrical, started in the room Noah shared with his sister, two-year-old Lilly.

When he spotted flames next to his bed, Noah raced into action and grabbed his sister.

He told WSB-TV: “I don’t know where the flames came from. I picked Lilly up, got to the window with Lilly, got the dog and got out. That’s it.”

Once his sister and the pooch were safe, Noah rushed back into the property and ran upstairs to warn his uncle.

The boy’s grandfather, David Woods, said: “If it wasn’t for Noah, I mean, we were all asleep, so we wouldn’t have known what was going on. We could’ve all lost our lives.

“Nobody got hurt. We got smoked up a little bit, but we’re all still alive.”

Following the incident, Noah came away with only a small burn to his wrist.

The extended family members who share the home reportedly didn’t have insurance, but the local community had banded together to help them.

I picked Lilly up, got to the window with Lilly, got the dog and got out.

And a GoFundMe page has since been set up to support the family.

A description of the incident on the page reads: “On the morning of 2/9, we were woken by my five-year-old grandson, alerting us that our home was on fire. We thank God for our Noah and his heroic actions.

“By the grace of God, all nine of our loved ones were able to get out of our home. If it wasn’t for Noah, we may not be here today. The electrical fire began in the children’s bedroom. Noah woke to flames in his room. He quickly grabbed up his two-year-old sister, Lilly, opened the bedroom window, climbed out the window, and ran next door to get help from his uncle, our son, Josh.

“Within minutes, all nine of us were able to get to safety. We praise God that we all are safe. Unfortunately, our home was a total loss.

“Due to a recent lapse in our home insurance, this has made a difficult situation a little worse. We are planning to rebuild and will likely need to stay in a motel for some time and likely rent a small house while we work to earn funding and build.

“It’s difficult for us to ask for help from our community however, we know this feat is too great for us to achieve alone.”

As of Friday morning, the page on the fundraising site GoFundMe had generated more than $14,000 for the family.