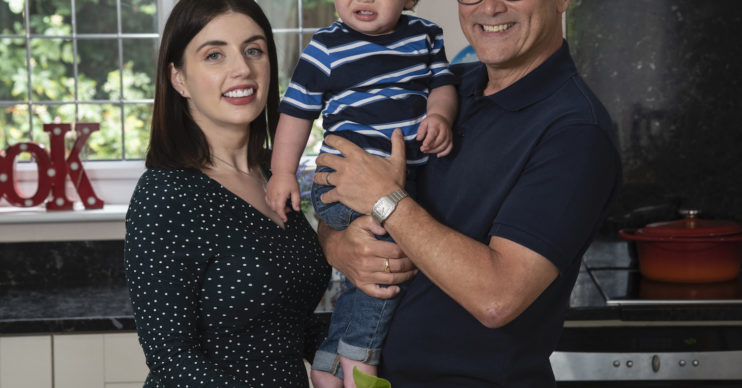 The MasterChef has been married three times before

The couple, who have a 21 year age gap, got hitched in 2016 after meeting online three years earlier.

Last year, they welcomed their first child together after the MasterChef star admitted to feeling anxious about being an “old” father.

But today, the doting parents are happier than ever.

How did Gregg Wallace meet his wife?

Anne-Marie, who is a caterer, tweeted the Celebrity MasterChef judge with a cooking question after watching him on TV.

She was curious to know if rhubarb and duck worked well together.

When he got the notification on his phone, Gregg went on Anne-Marie’s profile to answer. her question.

The pair then began exchanging messages on Twitter and eventually, he plucked up the courage to ask her out and sent her his number.

She of course said yes and travelled down to London to meet him but was nervous.

Anne-Marie was taking a big gamble as she wasn’t sure if she’d been catfished – was she really going to meet the Gregg Wallace?

Gregg revealed: “She came down to London to have dinner with me, and she said it wasn’t until we got to the restaurant, that she was comfortable it was really me and not an imposter.

“I think it’s just luck, and I got very lucky this time. Very lucky.”

When did Gregg Wallace propose?

The couple fell head over heels for each other after that first date.

So much so, the couple moved in together shortly afterwards.

Gregg then decided to pop the question just under two years later at the end of 2014.

Friends of the couple said they had never seen the MasterChef judge so happy.

A source told The Sun at the time: “Gregg has not had the easiest time in love. But he is convinced this time is different.

“He adores Anne-Marie, they have lots in common and get on incredibly well.

“The wedding will be some time next year and you can guarantee the food will be great.”

Ahead of the big day, he told the Mirror: “Next year is all about the wedding.

Gregg and Anne-Marie exchanged vows at Hever Castle in Kent, surrounded by family and friends in August, 2016.

His best man was of course his Masterchef co-star John Torode, who was “honoured” after being asked.

The food served on the day more than lived up to expectations.

Attendees were treated to eight courses including roast beef and trifle.

How many children does Gregg Wallace have?

Gregg has two children from his second marriage to pastry chef Denise.

The MasterChef star won full custody of both of them after the couple divorced.

His son Tom is now 26-yeas-old and his daughter Libby is now 23.

After getting married to Anne-Marie, Gregg, 55, was nervous about having another child.

However, after years of trying, the couple fell pregnant and welcomed their son Sid in 2019.

Speaking on Loose Women, Gregg explained his initial worries: “Well, I did say to Anna I wasn’t sure because by the time you’re my age, normally your children have grown up and you can have time with your wife again.

However, when Sid was born, Gregg’s eldest son Tom gave him some words of reassurances.

“I was a single dad,” he said. “I brought my children up on my own, they are now 25 and 22 and they were at the hospital when their baby brother was born. Do you know what my son said?