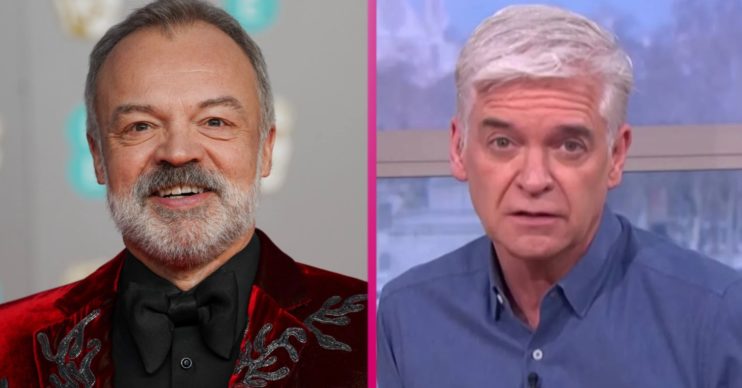 The presenter reckons Phil has found someone new

Graham Norton is convinced fellow presenter Phillip Schofield has a “secret boyfriend” after coming out earlier this year.

The much-loved host, who opened up about his sexuality on This Morning in February, recently moved out the marital home he once shared with his wife Stephanie Lowe and their two daughters.

However, the move has left Graham wondering if Phillip has something to hide.

What did Graham Norton say?

Speaking on Chris Evans’ How To Wow podcast, Graham, 57, said: “I imagine Pip has some secret boyfriend squirrelled away somewhere. I’m sure he has.

“I remember what it was like keeping that secret when I was a kid. To keep that secret for presumably 30, 40 years, what that does to you. It’s so strange.”

Graham also believes the star came out as “people needed to know”.

“I wasn’t aware of sexuality or the spectrum of sexuality, I didn’t understand you could be attracted to different people.

I imagine Pip has some secret boyfriend squirrelled away somewhere

“But I guess as you get older you’ve got more of a vocabulary for all of that stuff so you should be able to name things. But there are no rules.”

It follows shortly after the Graham Norton Show host announced his shock departure from BBC Radio 2.

The ITV star, 58, is yet announce whether he is officially dating someone new.

Meanwhile, back in October, Phil revealed he and his wife are yet to file for a divorce.

He admitted: “I’m still married to Steph. There is a great deal of talk of divorce… we have not discussed that at all.”

The star has been married to Stephanie for 27 years, with the pair sharing daughters Ruby, 24 and Molly, 27.

Read more: Eamonn and Ruth: This Morning viewers overjoyed to have couple back

Phillip previously opened up on his dating status during his emotional interview with co-host Holly Willoughby in February.

The dad-of-two admitted he’s “not rushing out to anybody” in light of the announcement.

At the time, Phil explained: “I’m doing each day at a time. This has always been a slow process.

“I’m not rushing out to anybody.”