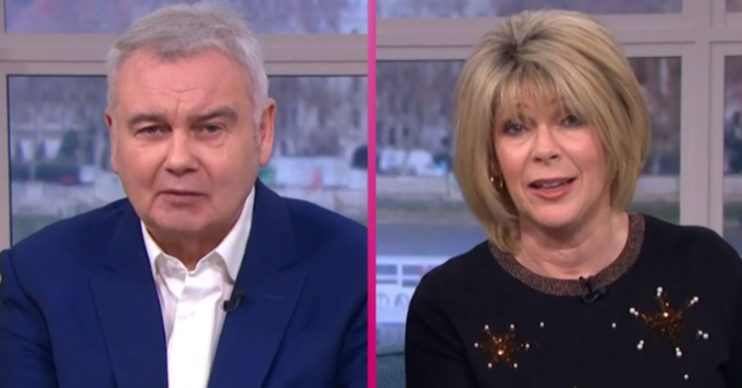 Eamonn and Ruth: This Morning viewers overjoyed to have couple back

Holly Willoughby and Phillip Schofield are taking a break

Eamonn and Ruth are on This Morning for the next few weeks and viewers are overjoyed to have them back on the ITV daytime show.

Regular presenters Holly Willoughby and Phillip Schofield are taking a festive break, although they will be returning for the special Christmas Day episode.

Eamonn Holmes and Ruth Langsford will be presenting the programme in their absence.

What did This Morning viewers say about Eamonn and Ruth?

On Twitter, viewers were pleased to have the couple back on the programme, amid reports they are being replaced in their regular Friday slot by Alison Hammond and Dermot O’Leary.

Others warned that fans should enjoy seeing Eamonn and Ruth on while they can, as they might have to wait a while before they present on the show again.

“Yeah Ruth and Eamonn #ThisMorning,” said one viewer alongside a string of party-themed emojis.

Another said, with a string of hearts: “Eamonn and Ruth for a couple of weeks!”

A third tweeted: “We may as well enjoy Eamonn and Ruth. Because the next time we see them on #ThisMorning will probably be February next year, during half term, or July next year during the summer holidays.”

Next time we see them on This Morning will probably be February next year.

Someone else responded to the idea of the couple not being back for some time with a GIF of actor Leonardo DiCaprio weeping.

A fifth tweeted, “Haha gosh I’ll miss Eamonn and Ruth! Eamonn is so condescending, I love it #ThisMorning.”

Eamonn and Ruth miss out on panto

Viewers didn’t get to see Eamonn and Ruth in their usual presenting slot on Friday (December 11).

Read more: This Morning: Eamonn Holmes criticised for being ‘rude’ to Spin to Win caller

That’s because the show aired a special panto episode. Phil and Holly tried to cheer up the nation with the likes of Alison and Dr Ranj.

Also in the pantomime were stars Sheridan Smith, Joanna Lumley and Christopher Biggins.