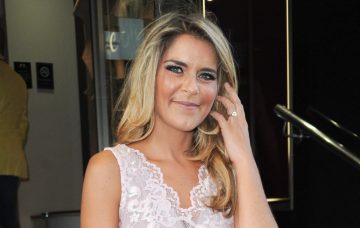 She was hours from death

Actress Gemma Oaten has revealed that doctors told her she had just 24 hours to live when she was at the height of her anorexia battle.

The Emmerdale star suffered with the illness for 13 years and now she has opened up about her darkest time.

The 34-year-old confessed she was merely hours from death and weighed just four and a half stone when her eating disorder was at its worst.

Gemma told the Sunday Express: “My parents were petrified as to what was happening to their once happy and healthy daughter so they took me to the doctors.

“[They] were told there was nothing they could do to help and not to worry as my BMI wasn’t low enough to cause real concern.”

However, Gemma explained that her anorexia was so bad a year later that she was close to dying. She was told she wasn’t drinking enough water to survive, let alone food.

She admitted that she came close to death more than once during this period.

“One year later I was admitted to a children’s psychiatric unit and told if I didn’t drink water, let alone eat, I would be dead in 24 hours,” she continued, adding: “I nearly died four times and also contemplated suicide.”

She believes her suffering could have been prevented if doctors had given her the help she so desperately needed earlier.

Gemma says that even though she got through her illness and recovered, she still has guilt for what she put her family through.

She also credits her dad, Dennis, for pulling her from the edge.

The star explained that her father removed her from the psychiatric ward she was put in for 11 months as he believed it wasn’t helping her.

Agreeing with his decision, she said: “If it wasn’t for my dad, I would be dead.”

Gemma spoke out in the hope of helping others who may be suffering and is urging people to dump the scales.

Proud to be in today’s #dailyexpress in support of @hopevirgo1 #dumpthescales campaign ahead of eating disorders awareness week. Many of you may already know my story, this campaign is so close to my heart. We must make a change. And eating disorder is a mental health illness, not a weight issue. 1000s are not getting the help and care they need because cliniticians are told to adhere to guidelines that a bmi needs to be 15 or under for a sufferer to get the help they need. I nearly lost my life 4 times because 24 years ago I wasn’t given that care because I wasn’t deemed low enough weight to have a problem. Please all read this article and sign this petition by copying and pasting https://www.change.org/p/eating-disorders-are-not-just-about-weight-dumpthescales to make a difference. I’ll be posting the full piece wrote in its entirity on our SEED website next week too. #eatingdisordersawareness #eatingdisordersawarenssweek #makeachange #anorexia #recovery #dumpthescales #EDAW2019