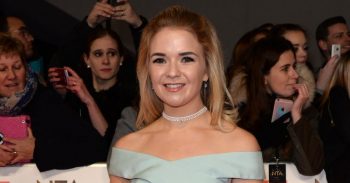 Actress Lorna Fitzgerald has shown off her new look on social media – and joked about her newfound resemblance to a well-known comedian.

The Former EastEnders  star, who played Abi Branning in the soap between 2006 and 2018, shared a selfie of her straight reddish-brown hair and thick glasses for her 69.2k followers on Instagram.

But she showed a good sense of humour by posting the snap alongside a pic of comedian Tim Minchin, who appears to have a similar hair-do and specs.

Tagging the Australian funny-man in the post, Lorna wrote: “@timminchin I think our mothers have some explaining to do… #twinning”.

Her fans seemed to be well and truly in stitches.

One wrote, “HAHAHA YES LORNA” and another responded with crying-laughing emojis, “That’s just made my boring sunday, cheers”.

A third commented, “I AM CRYING”, while someone else reminded her, “Yet you still look beautiful”.

Another fan suggested that having Tim Minchin as her long-lost twin would make a decent EastEnders storyline. One thought she also looked a bit like Simply Red singer Mick Hucknall.

At the beginning of last year, Lorna’s time on EastEnders came to a tragic close.

Her character Abi was critically injured in a horror fall from the roof of The Queen Vic pub on Christmas Day.

Abi, who was pregnant at the time, was hospitalised and put on life support. But she was said by doctors to have had “zero chance of regaining consciousness” as the incident had left her “brain stem dead”.

Eventually, Abi’s life support was switched off and she died – but not before her baby was delivered by c-section.

At one point, viewers were left fuming because Lorna’s name appeared to have been left off the credits.

EastEnders ends each year with an extra-long list of names, giving a well-deserved nod to everyone who has worked on bringing the show to our screens.

That normally includes every cast member who has featured during the last 12 months, along with all the crew, but Lorna’s name was left off the 2017 list.