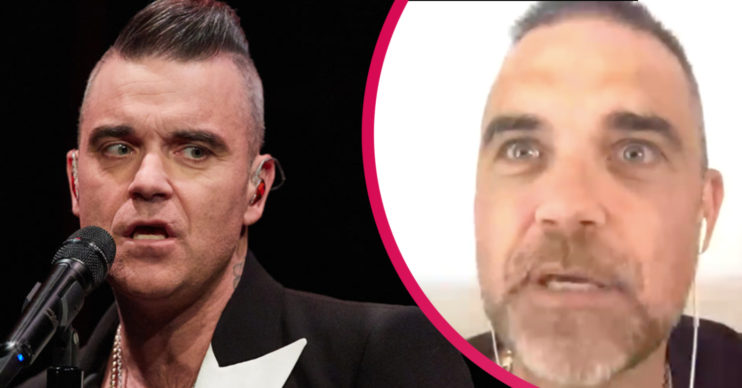 The singer's fans called for compassion after he was trolled online.

Singer Robbie Williams made a rather erratic appearance on Soccer AM on Sky Sports.

The Take That and solo star, 46, made an appearance via video link on the popular football and comedy show.

He appeared on the popular sports show today (Saturday, July 25) to talk football and crack some jokes about his music career.

Robbie spoke of his lifelong fandom for Port Vale and said that he had written dozens of songs in the last seven days.

He also reminisced about being in awe of band Status Quo’s professionalism in his early days with Take That.

What Soccer AM viewers say about Robbie Williams?

But some viewers worried on Twitter about the star’s interview.

Some said his interview was “bizarre”, “cringeworthy” and others appeared to mock his struggles with mental health.

However, many rushed to his defence and called for more compassion.

One user tweeted: “Everyone tweeting that Robbie Williams is on one etc.

“Leave they guy alone. He’s an anxiety and depression sufferer (read his biographies). He is a British hero and a good bloke.

“Sometimes people with mental health do act a bit odd but they are still human and feel #RobbieWilliams.”

“He needs compassion, not judgement”

A ‘non-fan’ even argued: “Not a Robbie Williams fan but if he is suffering from mental health issues. He needs compassion, not judgement. Yes, he may be or have been an idiot in the past, haven’t most of us?

“Also, and I’m [bleeping] sick of having to say it, lots of money or any other perceived social advantage doesn’t mean that people can’t have a mental health issue. Sick of the ignorance of some people.”

And a third user lamented: “I’m absolutely appalled at people being so cruel about Robbie Williams… The man has endured this type of [bleep] for 20 plus years now, and yet people seem to forget that he’s an extremely vulnerable person, and, in his words ‘very shy’.

“The Robbie Williams we see on telly is a sort of persona. He’s had to live through the worst times of his life whilst having a camera shoved in his face, with people like the ones currently tweeting negatively about him getting inside his head.”

BUT at least we are his favourite TV show 🤝 pic.twitter.com/j2e7olhQwT

And a fourth fan begged: “Is it too much to ask for a world where people don’t attack Robbie Williams for untrue reasons?”

The married father-of-four has openly spoken about his battle against alcohol and drug abuse in the past.

He has also said he struggles with anxiety and depression.

Back in 2018, he said that he struggles with self-sabotage but is able to appreciate the highs and lows of his mental health battle.

He told The Sun: “Fortunately and unfortunately, left to my own devices, I’m inclined to sabotage everything.

“I’ve got a disease that wants to kill me and it’s in my head, so I have to guard against that.

“Sometimes it overwhelms me and sometimes it’s a tool I need to get on stage. Sometimes I live in bliss and it’s wonderful.”