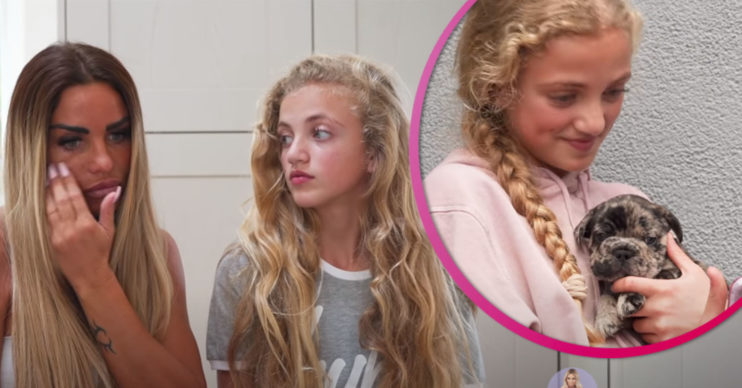 Rolo died in a "freak accident"

Katie Price and her daughter Princess have revealed how their puppy died.

Katie told viewers that Rolo suffocated when he became caught in a chair.

What did Katie Price say about the puppy?

I still can’t believe it, I’m still in shock about it.

“People are saying the puppy was left… the puppy wasn’t left at all. And it just got stuck under one of the stairs.”

Princess added: “Bunny [Katie’s younger daughter] was even there playing with him so it wasn’t like he was just left in the room.”

Katie continued: “No we don’t even leave our dogs. I wasn’t in the room and it was absolutely nobody’s fault.

“It was a freak accident. I still can’t believe it, I’m still in shock about it.

“When I found the dog I started compressing his chest.”

Katie said their family is “distraught” and she feels “upset” for Princess.

She added: “I don’t even know why the breeders are now turning on us. Iv’e never said a bad word about them.”

Princess cut in: “If anything, mum actually stood up for them so for them to turn it around is just wrong.”

“I just think it was inconsiderate of them texting Princess asking questions after I told them. She’s 13 years old.”

Earlier this week, Katie hit back at trolls’ comments towards the breeder.

Rolo’s breeder, JRC Bullies, has received nasty comments from trolls after paying tribute to the puppy.

Katie wrote on their Instagram post: “Everyone the tragic death of my daughter’s puppy Rolo is absolutely nothing to do with the breeders.

“Anybody blaming them should be ashamed of themselves. The breeders are absolutely amazing look after all the dogs and puppies at their home.

“It’s amazing clean and professional from day one and an absolutely lovely family.

“So stop trolling them as you are the kind of [people] who need to be on the register for trolling when Harvey’s Law is in place!”