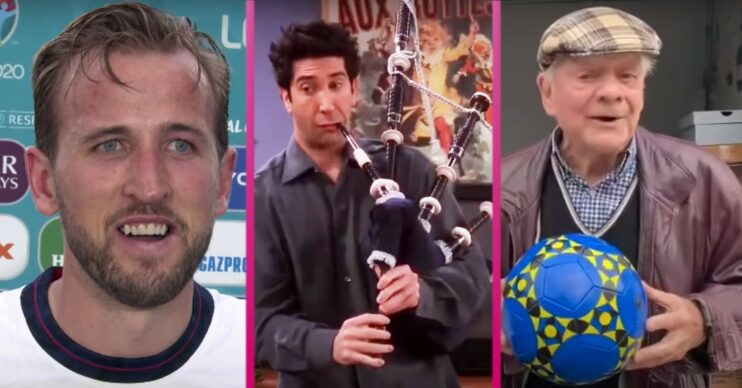 Which one is your favourite?

With England facing Italy in the Euro 2020 final tonight, the word is that “it’s coming home” – and the memes agree.

And as the pressure and expectation have ramped up as England have progressed through the tournament, so have the memes.

By this stage, it feels like the internet has nearly been filled with them. But, it seems, there will always be room for more… and these are some of the funniest to have done the rounds.

Very soon, in a matter of hours, we will know whether it is indeed coming home… and whether it does or not, we’ll always have the meme-ories.

Sir David Jason has dusted off Del Boy’s cap and three-wheeler for this ‘Only Fools and Footballs’ special.

Sitcom fave Del couldn’t help but offer a few words of encouragement to Gareth Southgate, Harry Kane and the team… and also take the opportunity to flog a few balls at the same time.

One commenter on YouTube remarked: “‘He who dares wins’… that sent shivers down my spine and put a tear in my eye. Come on England!”

And someone else added: “This is the best thing I’ve seen in 2021 and nothing else will top it!”

“I have no idea to this day what those two ENGLISHMEN were singing about, truth is I don’t wanna know, some things are best left unsaid.” #Shawshank #England #BaddielAndSkinner #ItsComingHome 🏴󠁧󠁢󠁥󠁮󠁧󠁿🏆🏴󠁧󠁢󠁥󠁮󠁧󠁿 pic.twitter.com/3bpw8uS5Hr

Who ate all the pie charts?

A game to enjoy with Friends

And others who enjoy monkeying around.

The morning after the night before

Anyone else calling in sick?

But whose home is it coming to?

A little bit of politics.

Even if England played a team of scarecrows, it would still be a no brainer about football coming home…

This is still the best Three Lions meme >> pic.twitter.com/eSoFm3Jsl3

Check out even more England “it’s coming home” memes in the video below! Be warned though, some memes may contain bad language.

England play Italy in the Euro 2020 final this evening (Sunday July 11). Kick off is at 8pm and coverage will air on both BBC One and ITV.