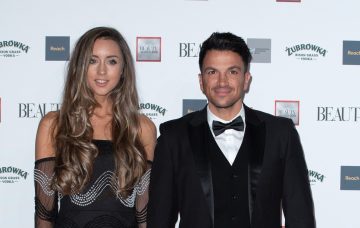 Emily Andre reveals secret to her and Pete’s happy marriage

She has opened up on what keeps them strong

Emily Andre has opened up about her and Peter Andre’s marriage to reveal what keeps them strong.

Junior doctor Emily, who has been married to 45-year-old Pete since 2015, insists the key is that they never argue.

It comes after the news that Pete was the love of his ex Katie Price’s life, according to her estranged husband Kieran Hayler…

Emily, 29, wrote in her OK! column: “Sharing problems is a great way to get them sorted!

“I think all couples have things they don’t agree on, but we’re very lucky that we happen to get on very well.”

Emily’s portrayal of their relationship is certainly a contrast to Katie and Peter’s tumultuous marriage.

They were rocked by rows when they were a couple and their fall outs would often be documented on their reality show, Katie and Peter: The Next Chapter.

Just last month, Kieran claimed that 40-year-old Katie still isn’t over Pete, with whom she has Junior, 13, and 11-year-old Princess.

The 31-year-old, who has Jett, five, and Bunny, four, with Katie, said that Pete is “the love of her life and no one can compete.”

He told New! magazine: “She always said if it wasn’t for her celeb lifestyle, the reality shows and stuff, her and Peter probably would’ve lasted.”

He added: “There’s always someone else to blame. How many more years can she blame things on her and Pete not working out?”

Meanwhile, Pete, who has Amelia, four, and two-year-old Theo with Emily, recently spoke about being in awe of his wife and called her “the best”.

Read more: Gemma Collins says she should have been in the Dancing On Ice skate-off

“I have to go to the gym nearly every day, but I look at her and she never goes and still manages to look incredible after two children. She’s just the best.”

What do you make of Emily’s comments about marriage? Leave us a comment on our Facebook page @EntertainmentDailyFix and let us know.