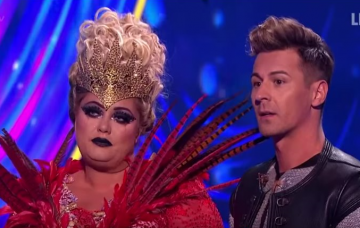 GC made the confession to co-star Saira Khan

Saira Khan was booted off Dancing On Ice last night, but she has revealed that Gemma Collins told her she should have been in the bottom two instead!

TV host Saira was on Loose Women today (4 February) to talk about her DOI exit when she made the revelation.

Sitting with her professional skating partner, Mark Hanretty, she told the Loose Women panel: “I have to give credit where credit is due. (Gemma) came up to me last night and she said: ‘I should have been in the skate off, not you.'”

“But you know what, it’s a TV show. It’s about performance and people are keeping her in because, whatever you think of her, I want to watch her on the ice and I want to see what she does next.”

It comes after some disgruntled viewers complained about Saira getting the axe from DOI, because she is not the weaker skater.

One wrote: “SairaElla & @markhanretty sad to see you go. Undeserved, definitely not the worst skater in the competition 💜.”

While another added: “So gutted to see you and @markhanretty go last night! It was definitely the wrong decision! I have loved following you on the show each week. Well done to you both ⛸❄️.”

A third commented: “Loved watching you gutted your gone think other people were a lot worse than you ⛸⛸⛸⛸⛸⛸.”

Saira said she is “gutted” that her DOI journey is over and revealed that she is going to carry on with skating lessons.

We are gutted to have ended our @dancingonice journey. I have had the time of my life dancing with this gorgeous guy @markhanretty. We are both in @loosewomen today to talk about last night – hope you can join us. Thank you for all your kind words and support- I have been humbled by the emotion so many of you have shard. I’ve decided to carry on my skating journey and will be taking lessons at my local rink – so watch out @disneyonice – I may attend an audition. X

Meanwhile, Gemma, 37, has admitted that her performance “wasn’t up to scratch” this weekend but she has vowed to work harder and impress next week.

She added that it means the world to have the public keeping her in the competition every week.

She wrote on Instagram: “Thanks for everyone that voted for me tonight, To have the public behind me means the world to me. My performance wasn’t up to scratch, Last weeks fall knocked my confidence but I promise to be back next week & better then ever, GC style!!!! ❤️ Can’t believe me and @themattevers have made it past the half way point, THANK YOU!!! 💕.”

Do you think Gemma should still be in the competition? Leave us a comment on our Facebook page @EntertainmentDailyFix and let us know