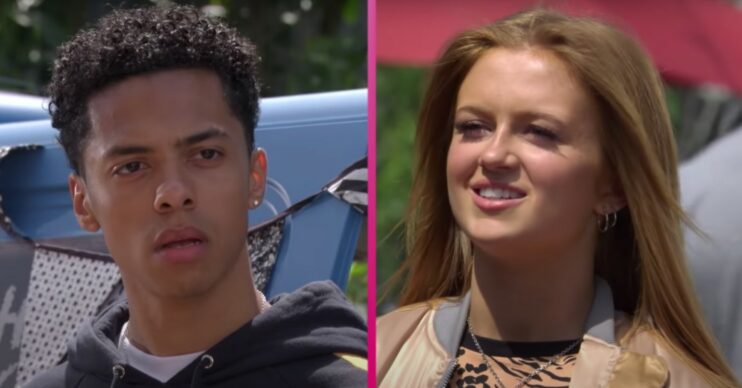 They arrived at his flat following a ‘date’ at the cinema and left separately the following morning, according to The Sun.

This claims comes a week after an ex of EastEnders star Zack Morris reportedly branded Maisie Smith the “other woman”.

Brooke Maskell dated Zack, 22, for 18 months before they split in December 2019.

The Sun claims Brooke, 21, told a friend: “There were three of us in that relationship.”

ED! has contacted representatives for Zack Morris and Maisie Smith for comment.

Zack Morris and Maisie Smith: What are the tabloid claims?

According to the The Sun, makeup artist Brooke has told pals Tiffany Butcher star Maisie was a “big flirt”, even when she was with Zack.

A friend is reported to have told the newspaper: “Brooke always felt Maisie was the other woman in their relationship as she was a big flirt.”

The source also indicated Maisie “ignored” Brooke during social events, even though Zack’s character Keegan Baker had a storyline romance with Tiffany.

The friend continued: “Maisie was always there in the background. And of course when everyone was talking about Maisie and Zack’s on-screen relationship it wasn’t nice for Brooke.”

The source also claimed Zack gave Brooke a heads up that his character would be the focus of a teenage romance plot.

Keegan and Tiffany eventually eloped from Albert Square to marry.

According to The Sun, Brooke appreciated the warning. But she also understood she may not enjoy seeing her boyfriend snogging on TV, even though it was his job.

Maisie and I have only ever been just good mates, nothing more.

“He was always so considerate about her feelings,” the friend continued.

The friend also noted that ‘all Brooke wants’ is for her ex to be happy.

Zack and Maisie have been linked in several tabloid reports since he became a single man.

They were first linked two months after Maisie appeared in the Strictly Come Dancing final.

However, they have denied being any more than friends.

And now Zack has advised his social media followers to take this latest tittle-tattle with a pinch of salt.

He wrote on Twitter: “All I can say is: ‘Don’t but into all the gossip people, I know i’m not.'” He ended his message with a laughing emoji.

Last year Maisie said: “I film most of my scenes with Zack. Naturally we have built a great friendship.”

And Zack reportedly told The Sun: “Maisie and I have only ever been just good mates, nothing more.”