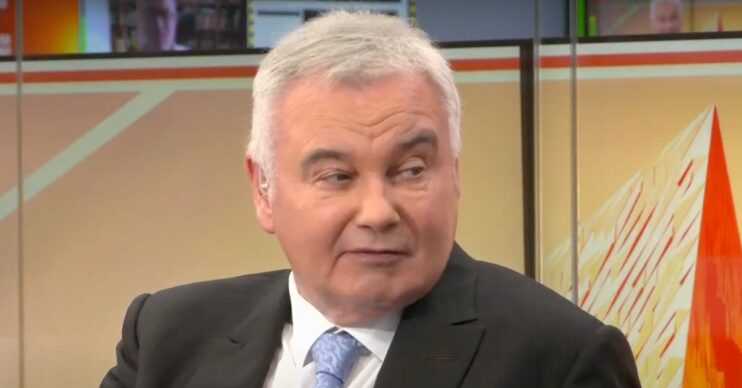 Eamonn has suffered from chronic back pain for a while now

Eamonn Holmes’ fans offered their support on Instagram yesterday after he addressed concerns over his “continuous” health struggle.

The Irish broadcaster has suffered from chronic back pain for years now – something he described as an ongoing struggle.

The 62-year-old was at Old Trafford with his son, Jack, for the Manchester United Legends vs Liverpool Legends match.

Eamonn uploaded a couple of posts from his time at the stadium, including one video that caught the attention of concerned fans.

In the video, Eamonn, holding his walking stick, can be seen walking down some steps inside the stadium.

“This is something very, very few people get to see. This is the director’s box,” Eamonn says as he makes his way down the stairs.

The camera then turns to show Old Trafford filling up with fans before the match.

“This is like a second home for me,” Eamonn says.

One concerned fan took to the comment section of Eamonn’s post upon seeing the way he was walking.

“Your walking is looking bad Eamonn. I hope you are well,” they said.

“So sorry to hear that. Sending you lots of love,” his follower replied.

Another said: “I know the feeling still recovering from hip replacement and to the people who said you will walking ok in a few weeks not true.”

Elsewhere, Eamonn’s followers just seemed to be happy to see the presenter smiling and enjoying himself.

“Not interested in footy but cheerful Eamonn makes it look exciting,” one follower said.

“You deserve to be in the director’s box enjoy,” another wrote.

This isn’t the first time that Eamonn’s Instagram snaps have gotten some attention.

The 62-year-old took to Instagram last week to share a heartwarming snap of himself and his granddaughter, Emilia.

In the picture, Eamonn is sitting in an armchair while holding Emilia. Both are grinning at the camera.

Plenty of Eamonn’s followers took to the comments to gush over the picture.

“Wow the resemblance is uncanny, beautiful,” one of them said.