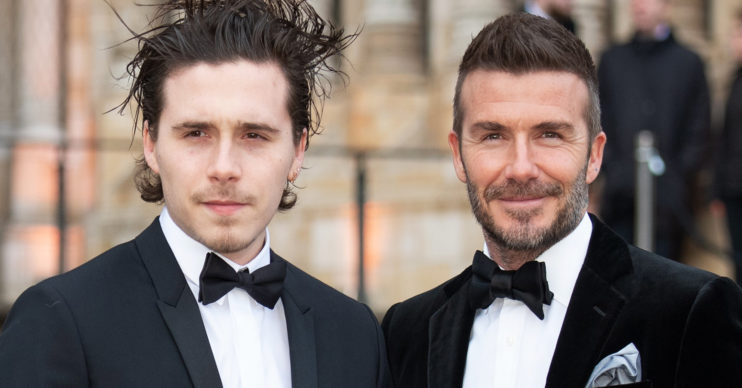 Taking to Instagram, David shared the snap in view of his some 63.6 million followers.

He wrote: “Congratulations to these two beautiful people.

Read more: Piers Morgan leaves the UK for the summer

The gushing post comes just a day after Brooklyn posted that he had asked his actress girlfriend to marry him two weeks prior.

“Luckiest man in the world”

The photographer addressed his some 12.1 million Instagram followers with:

“Two weeks ago I asked my soulmate to marry me and she said yes, I am the luckiest man in the world.

“I promise to be the best husband and the best daddy one day. I love you baby.”

Shortly after his post, Victoria relayed the photo onto her own account in view of her 28.4 million followers.

Here she wrote that the family “could not be happier”.

Read more: Kerry Katona divides fans as she shows off weight loss in her undies

She explained: “The MOST exciting news!! We could not be happier that @brooklynbeckham and @nicolaannepeltz are getting married! Wishing you so much love and a lifetime of happiness. We all love you both so much x @davidbeckham @romeobeckham @cruzbeckham #HarperSeven.”

“I’m so lucky to call you mine”

Nicola is an American actress who has appeared in the likes of television series Bates Motel and movies Transformer: Age of Extinction and Back Roads.

She is the daughter of billionaire tycoon Nelson Peltz and former model Claudia Heffner.

Nicola replied to Brooklyn’s post with: “I’m so lucky to call you mine.”

And she clearly already gets on well with the in-laws, as she wrote of how she “loves” Victoria.

She replied to Victoria’s tribute : “I love you so so much Victoria I’m the luckiest girl.”

And it looks like Brooklyn’s sister Harper, nine, took the photo.

In view of her 1.7 million followers she wrote: “You’ve made me the luckiest girl in the world. I can’t wait to spend the rest of my life by your side.

“Your love is the most precious gift. I love you so so much baby and thank you Harper for this pic.”

Nicola and Brooklyn were first linked in October of last year. They went public with their relationship this January.

What do you think of their engagement? Share your thoughts with us on our Facebook page @EntertainmentDailyFix.