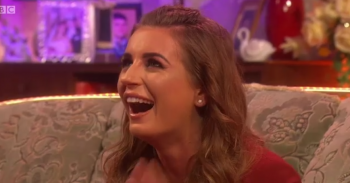 Dani Dyer was left blushing after making an awkward X-rated blunder about her dad on BBC’s All Round to Mrs Brown’s.

The Love Island winner, 23, joined a host of other celebrity guests on the chat show on Saturday night when she said she wanted to “have it off” with her EastEnders actor dad.

Jennifer Gibney’s character, Cathy Brown told Dani she had previously met her dad Danny Dyer, who told her his dream would be to work alongside his daughter on EastEnders.

“What do you think of that idea?” she asked.

“With that, you really have to dedicate all your time to it…” Dani replied.

Jennifer then said Danny wanted his daughter to play an enemy rather than a friend.

“I think because we get on so well at home, it would be nice to have it off with each other,” she replied in agreement.

Dani’s embarrassing gaffe prompted the audience to burst into fits of laughter while Mrs Brown had to fan herself.

“Not like that!” Dani exclaimed, after realising her choice of words perhaps weren’t the best.

“‘Be nice to have it off with each other’ Bad choice of words there,” one wrote.

A second said:  “Just catching up on AllRoundToMrsBrowns and in stitches at Dani Dyer ‘we get on so well at home it would be nice to have it off with each other’.”

Dani’s mum Jo also appeared on the show and seemingly made a reference to the recent pictures of her daughter kissing her ex shortly after splitting from Jack Fincham.

When asked if she must be proud of her girl after such a big year, Jo replied: “Sometimes.”

“No, she is a good girl,” she quickly added.

When asked what advice she’d given her daughter, Jo said: “Just stay rich, that’s it… no I’m joking.

“You’ve just got to be happy. If it goes wrong, we’ll sort you out again. We’ll get you another reality show.”