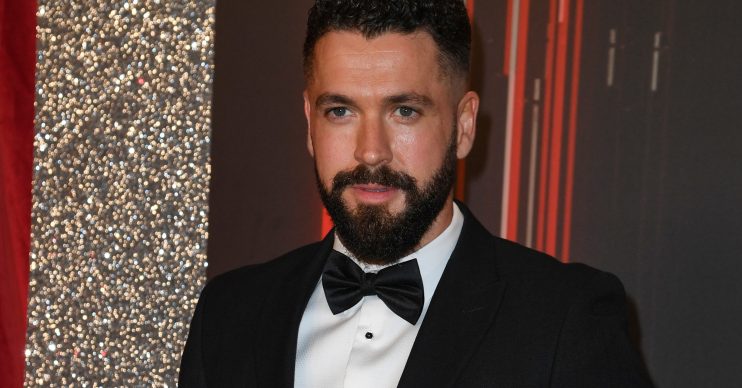 The actor declared his love for fiancée Sophie

Read more: Shayne Ward reveals he gets messages from men about his Coronation Street suicide story

Sharing a collection of photos on Instagram the actor and singer, 35, said: “I feel like the luckiest man alive.

“Happy Valentine’s Day to my two heaven sent angels. I love you with all my heart.”

Shayne’s fans loved the heartwarming sentiments with one commenting: “You’re so special in your music and your feelings”.

Another said: “So lovely to see snapshots of your life on here together, thank you for sharing,” while a third added: “Oh so nice to see your happy family on here. Happy Valentine’s day.”

I feel like the luckiest man alive Happy Valentine’s Day to my 2 Heaven sent angels. I love you with all my heart xxxx @sophieaustin84 ❤️

Shayne and Sophie, who played Lindsey Butterfield in Hollyoaks, got engaged in December 2017.

Their daughter Willow was born a year earlier in December 2016.

The happy couple recently revealed they’ve shed an amazing six stone between them after he piled on the weight while on Coronation Street and Sophie struggled to lose her baby weight.

Explaining how they shaped up on Lorraine, Shayne said: “So I joined a company called U.P fitness, not just myself but my partner Sophie as well.

Shayne left Coronation Street in May 2018 when his character Aidan Connor took his own life.

Since then, Shayne was cast in a film called Stairs and is currently starring in the UK tour of Band Of Gold alongside fellow former Corrie star Sacha Parkinson, ex-Emmerdale star Gaynor Faye, former EastEnders actress Laurie Brett and Hollyoaks star Kieron Richardson.

How are you celebrating Valentine’s Day? Visit our Facebook Page @EntertainmentDailyFix and let us know what you think.