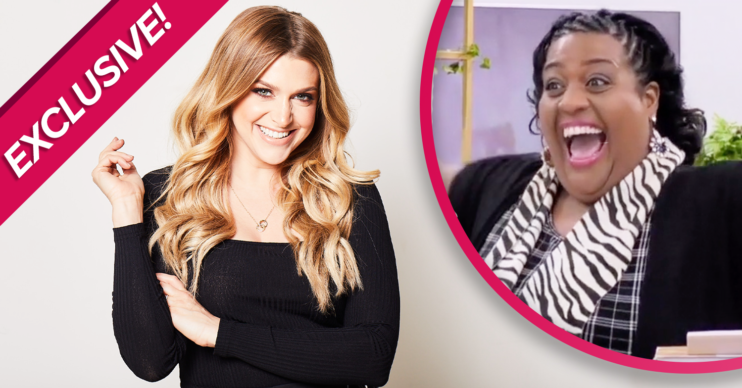 The pair puckered up on the show earlier this year

TV’s Alison Hammond formed quite the friendship with Celebs Go Dating guru Anna Williamson when she appeared on the show earlier this year.

The This Morning roving reporter went on the show, which aired just before lockdown, looking for love.

And, although she was unsuccessful, her pal Anna hasn’t given up hope of finding Alison her “perfect prince”.

Speaking exclusively to Entertainment Daily, Anna revealed that whoever Alison ends up settling down with will be a “very lucky man”.

Why? Because she’s an ace kisser, of course!

Read more: Ray Quinn reveals he’d love Brookside to make a comeback so he can reprise his role

Fans of the show will remember that Anna helped Alison practise her kissing technique ahead of her date.

“One hell of a kisser”

And, while it seems no job is beyond the remit of a celebrity dating coach, Anna actually quite enjoyed it.

My job is not done until we have Alison with the perfect prince. She’s amazing.

“Let me tell you now, Alison Hammond is one hell of a kisser. There is a man out there who is a very very lucky man,” she said.

Mum-of-two Anna – who’s just finished fronting E4’s Celebs Go Virtual Dating – is one of the many Brits who have fallen under the TV presenter’s spell.

“I love Alison, that woman is just everything and more. She needs her own prime-time show. She’s a very wonderful woman in all ways.”

However, Anna said there’s still work to do when it comes to finding single Alison her perfect man.

Anna told ED!: “My job is not done until we have Alison with the perfect prince. She’s amazing.

“She’s so beautifully open but also she drops that guard emotionally as well.

“We had tears with Alison,” Anna revealed, telling us: “What you see on the telly is often only a snippet of the amount of time we have with the celebs.”

“Each time we come in to see them, they get full-on therapy for an hour, but you only tend to see the highlights.

“I would love to get her back on the show.”

We’re sure there’s a queue of eligible bachelors hoping Alison signs up, too!