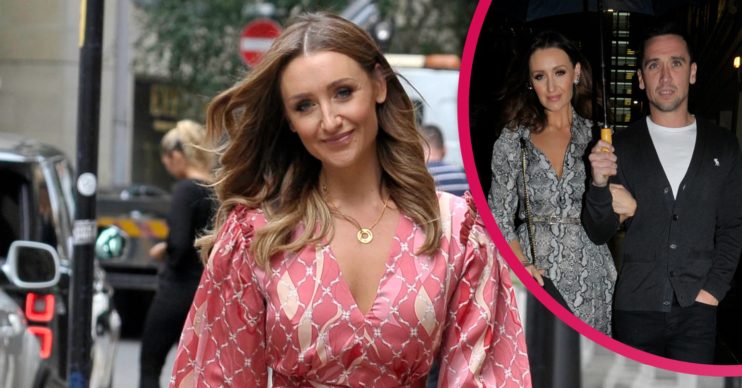 Catherine Tyldesley left little to the imagination as she posed in a semi-naked snap taken by husband Tom Pitfield.

The former Coronation Street star, 37, stunned fans with the modelling shot, which she shared on Instagram yesterday (October 8).

Despite appearing completely nude, Catherine told her followers it was actually the handy camera skills of photographer husband Tom.

#nakedambition (I wasn’t actually naked… she has her PJs and an old sports bra on babes) So good to be working with my hubby! Photography @tompitfieldphotography All cosmetics used @hseofevelyn 😍 #makeup #dreamy #nudes

What did Catherine Tyldesley say?

The photo showed Catherine covering her cleavage with her arms crossed.

Captioning the snap, the actress shared: “#nakedambition (I wasn’t actually naked… she has her PJs and an old sports bra on babes).

“So good to be working with my hubby! Photography @tompitfieldphotography.

Catherine’s celebrity pals rushed to comment on the shot.

While a fan gushed: “You look stunning Cath.”

In September, the former soap star shared a series of photos of five-year-old son Alfie posing for a special birthday surprise.

Alongside the black and white snaps, she wrote: “The most special birthday gift I’ve ever received. And words I needed to hear. From the greatest gift I’ll ever know.

“Oh Alf, you know how to pull mummy’s heart strings. As do you you husband @tompitfieldphotography 🙌🏻  THANKYOU.”

What else has Catherine been up to?

Earlier this week, Cath was left “mortified” after catching a couple having sex in a country lane.

The star, who played Eva Price in Corrie, revealed to her Instagram followers that she was eating lunch when she caught a glimpse of a couple in a nearby car having “adult cuddles”.

Catherine said: “I am a bit mortified but I have to share it. It would only happen to me.

“There’s a car parked a bit further down and I was squinting thinking, I’m sure I can see movement in that car. There’s more than movement. The car in front is having casual adult cuddles at lunch time.”

She later added: “If you’re going to do it in a car, either borrow a bigger car or limber up first. It looked all kinds of awkward.”