TV personality Caroline Flack teased fans on social media by going topless as she made the most of the Mediterranean sun yesterday.

The telly presenter, 39, is believed to be on holiday in the Balearics ahead of the new series of Love Island on ITV2 in the coming weeks.

Kitted out in stripy bikini bottoms and sunglasses as she lay front down and basked in the beautiful weather, Caroline hinted she may be getting in the mood for the raunchy reality show. 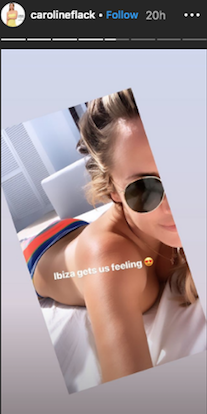 Giving fans a glimpse of her hol (Credit: Instagram @carolineflack)

However, it seems Caroline may have neglected to use enough sun tan lotion - with a later image showing a prominent tan line on her shoulder.

"Wear sunscreen kids," she remarked in the open-mouthed pic.

Despite possibly catching a few more rays than she intended, Caroline is back worshipping the sun today - although it appears the Ibizan weather may no longer be all clear blue skies.

"Head in the clouds today," she wrote on her Insta Stories update before sharing the same pic as a permanent pic on her account with the caption "Cloudy".

Nonetheless, fans were still pleased to see the cross-legged Caroline turn up in their timelines once again. 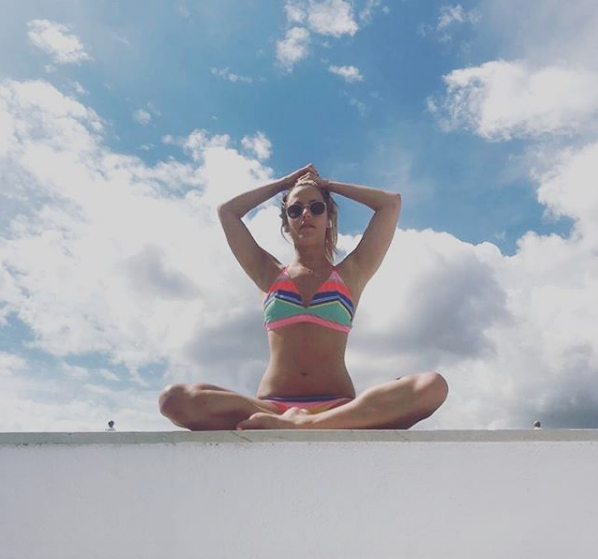 Amid claims Caroline has 'rekindled her romance' with Danny Cipriani, Love Island is rumoured to kick off again at the start of June.