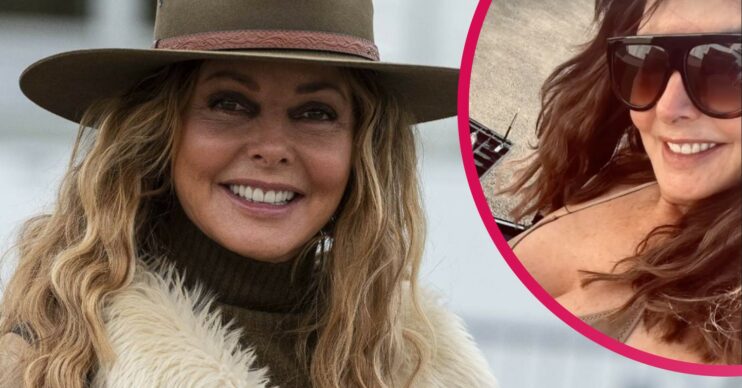 Carol Vorderman stripped off on Instagram to get to grips with some home improvements yesterday (Thursday July 15).

TV presenter Carol joked with Instagram fans she was “ready for action” as she wielded a screwdriver to help her with her DIY job in the sunshine.

The 60-year-old ex Countdown favourite also referred to herself as the “bikini builder” as she got to work.

And although many fans appreciated how handy she was, many more were blown away by Carol’s figure.

What was Carol Vorderman building?

Carol recently shared with Twitter followers how she has been attempting yoga poses while paddleboarding.

And as it turns out, she needed somewhere to store all her water sport kit.

So the glam star rolled up her sleeves – or rather, didn’t bother wearing any – and constructed a storage box.

Pleased with her efforts, she also posted a short clip of the box’s lid lifting and opening.

Always knew you had an amazing figure Carol but good God.

However, Carol did come to realise after finishing that something may have gone slightly askew at some point.

She laughed: “Got some spare screws…. mmmmmm…”

How fans reacted on social media

Carol’s followers admitted their eyes were on stalks when it came to browsing her images.

There were also numerous guffaws comparing the ‘big chest’ she’d built to her own, many mentions of ‘tools in hand’ and even suggestions she should set up an OnlyFans page.

Among the tamer comments posted on Twitter were: “Vorders you crack me up. No one is looking at the screwdriver but enjoy the weather.”

Another person gasped: “Possibly not concentrating on the Wayfair goods, tbh.”

And someone else remarked: “Always knew you had an amazing figure Carol but good God.”