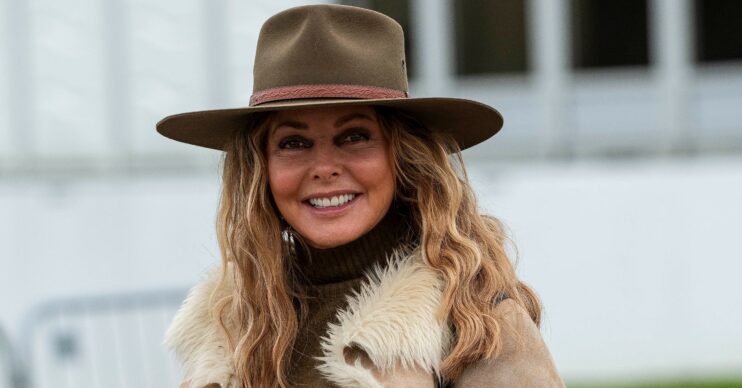 Carol Vorderman wowed Twitter fans as she poured her curves into a skintight dress and headed for a day out at the races.

The former Countdown star excitedly shared images of herself in her new frock as she got ready to mingle.

Carol, 60, made the most of her khaki ensemble, excitedly telling her followers she was heading to Ffos Las in Wales to gamble her day away.

She then showed off her choice of outfit – a knitted button-down maxi dress with underbust cut-outs and button detailing.

One fan gushed: “So magnificent and stunning always with lovely smile Carol.”

Another said: “You are very beautiful Carol.”

And it wasn’t just her dress that was impressive – her mode of transport was also pretty fancy.

The popular mathematician excitedly shared a photo of her stood beside the helicopter she was touching down at Ffos Las in.

She flew in with her friend Gareth Abbott and whilst stood beside the chopper wrote: “Here’s my lift!”

Earlier in the week Carol told fans how she would have her own race at the event.

She said: “I’ve been given my very own race on Thursday… so excited. At @FfosLasRC near Carmarthen Flag of WalesRed heart. It’s called Carol Vorderman Loves West Wales Nursery Handicap.”

Carol then joked with fans over her eagerness for the race as she realised she may be a little over the top with her tweets.

She quipped: “Have I mentioned I’ll be excited to be there?”

What do you think of Carol’s dress? Let us know by heading to our Facebook Page @EntertainmentDailyFix and leaving a comment!