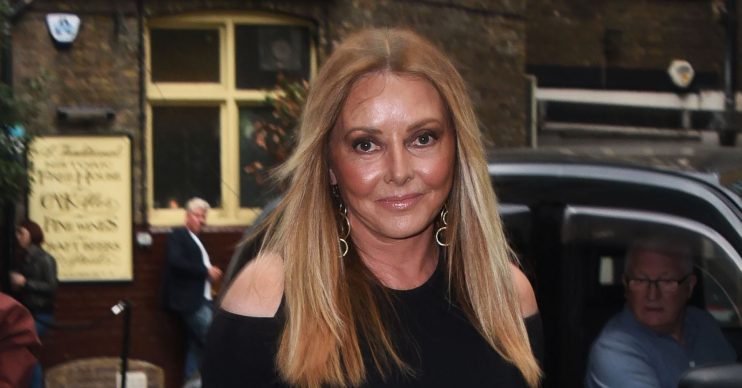 Former Countdown star Carol Vorderman has taken to Twitter to show off her new hair style.

However, the 58 year old’s followers were quick to admit they were rather distracted by the star’s killer curves, which were also on display in the picture.

Tweeting a few shots of herself with her long blonde hair parted in the middle, Carol asked her followers: “Do you like my new hair? Cos I do.”

Do you like my new hair…
Cos I do…
Thank you AGAIN my lovely James ⁦@JrHairBeauty⁩ ❤️❤️
And the gorgeous Talea ⁦@taldoranx⁩ for looking after me #HeadMassage 😘😘🥂 pic.twitter.com/i1y6Cpy9Ve

Posing in a skin-tight white top and black PVC-style skinny jeans, fans were quick to reveal that they were so distracted by her choice of outfit that they didn’t “even notice” Carol “had a head”.

Sorry but I didn’t even notice you had a head with a tight top and trousers like those. Lol.

Others said the presenter looked “absolutely stunning” and added: “Your hair looks fabulous.”

Others sent the star gifs declaring their love.

However, not all of Carol’s followers were quite as complimentary about her look.

Omg what have you done to yourself. You look like a plastic version of yourself. Mutton dressed as springs to mind

Others were more diplomatic but said that Carol doesn’t look like herself any more, with some followers admitting they think she’s had too much surgery.

What we supposed to say … you don’t look like you anymore. If you like your hair great ! Don’t come searching for adoration though. Thought you were better than this

Others joked that they were turning into their dad and developing a crush on Vorders.

Dammm girl. Whatever it is you’re doing, keep doing it. I canny believe I’ve got a thing for Carol vordaman. I didny even like countdown.
I’ve become ma dad 🤣🤣🤣

It’s not the first time Carol’s curves have courted attention.

She previously won praise for her behind, being named Rear Of The Year in 2011 and 2014.

Fans also raved about her curves when she appeared on BGT spin-off Britain’s Got More Talent back in June, and when she posted a bikini selfie during this summer’s long-forgotten heatwave.

What do you think of Carol’s new look? Let us know on our Facebook page @EntertainmentDailyFix.