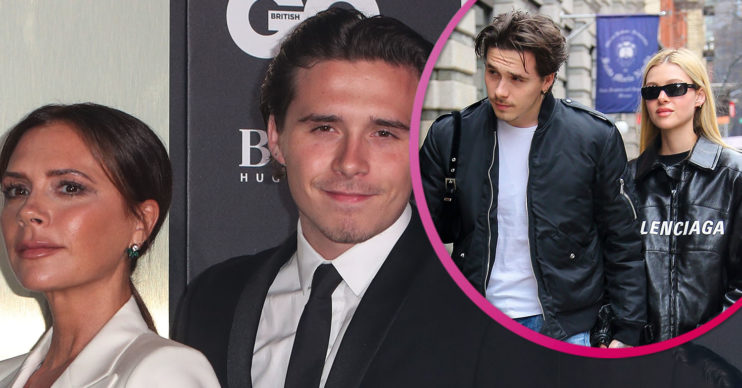 Victoria Beckham was the inspiration behind her son Brooklyn‘s engagement ring choice for his girlfriend, according to an expert.

At the weekend, Brooklyn, 21, announced he had popped the question to Nicola Peltz.

The couple shared a beautiful photo to Instagram showing them embracing each other as Nicola gave a glimpse of her huge rock.

Ben Jarrett from Jewellery specialists Est1897 said: “It’s no surprise that Brooklyn has gone for an emerald cut ring.

“His mother Victoria has had 14 engagement rings during her marriage to footballer David Beckham, and three of the stunning pieces have been emerald cut, which seems to have been the inspiration for her eldest son.

“We estimate the ring to be a combined stone carat of between 4.5 and 5 carats worth of diamonds.

“A central elegant emerald cut diamond, the band itself is most likely platinum and is adorned with additional diamonds.

“The ring appears as though it is a D in colour and IF in clarity, the highest possible quality of diamond, with internally flawless clarity, free from any imperfections found on a ring.

“We estimate the price to be approx £335,000 for this unique designer piece.

“As Brooklyn has designed the piece himself, we suspect a high-end designer will be behind it, which will also have enhanced the price.

“This is huge in comparison to Victoria’s first ring, which was a three-carat marquise-cut diamond set on a plain yellow gold band which was estimated to be £65,000 ($80,000) at the time.

“Since then Victoria has sported a number of expensive rings, so it will be interesting to see if Nicola upgrades this ring in years to come.”

At the weekend, Brooklyn announced his happy news on Instagram.

Alongside the image of himself and Nicola, he wrote: “Two weeks ago I asked my soulmate to marry me and she said yes.

Meanwhile, Nicola gushed: “You’ve made me the luckiest girl in the world.

“I can’t wait to spend the rest of my life by your side. Your love is the most precious gift.

“I love you so so much baby and thank you Harper for this pic.”

Fashion designer Victoria wrote on Instagram: “The MOST exciting news!!

What did David say?

David said on his Instagram: “Congratulations to these two beautiful people.

Wishing you so much love and a lifetime of happiness.

“As they begin this exciting journey together we are so so happy for you guys.”