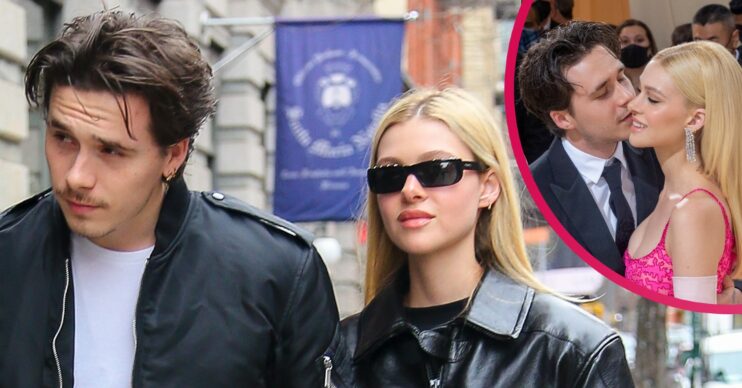 The couple are reportedly due to marry next weekend

Brooklyn Beckham and his fiancée Nicola Peltz have ‘signed a strict prenup’ before they wed, reports claim.

The 23-year-old is due to marry heiress Nicola in Palm Beach, Florida, next weekend in a £3 million ceremony.

But according to The Mail On Sunday, the couple have agreed to protect their wealth in a watertight agreement.

Brooklyn’s parents, David and Victoria Beckham, are worth £380 million.

However, Nicola has far more cash behind her.

The 27-year-old’s financier father Nelson is reportedly worth £1.3 billion.

Brooklyn and Nicola will wed next Saturday at the Peltz family’s beach house.

David, Victoria and their other three children – Cruz, Romeo and Harper – are already said to have flown to Florida.

The wedding will be a huge celebrity affair, with both families being pals with big names.

Insiders have told The Mail On Sunday that the wedding is being described as ‘Miami society meets British celebrity’.

On the Beckhams’ side, celebrity chef Gordon Ramsay and his family are expected to attend.

Actress Eva Longoria and former footballer Phil Neville could go, and Mel B has confirmed her attendance.

Unfortunately, Brooklyn’s famous godfather – Sir Elton John – is unable to attend, as he will be on his rescheduled Yellow Brick Road tour.

When did Brooklyn propose?

Romantic Brooklyn popped the question to Nicola in July 2020.

He recently told James Corden on America’s The Late Late Show: “I proposed in the countryside in New York in Bedford.

He added: “I had the ring and couldn’t open up the wine, which was really embarrassing.

“After 10 minutes, I finally opened it. I poured her a glass and got on my knees. She didn’t know what I was doing!”

Meanwhile, two weeks ago David revealed that he was all ready for his son’s big day after buying a suit.

The star had gone shopping with his dad Ted and his father in-law Anthony.

He wrote on Instagram: “Creating special memories. Wedding plans underway & the dads are all suited and booted.”