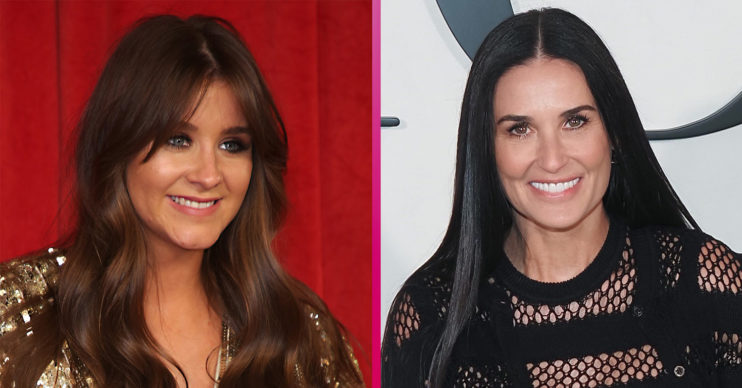 The soap favourite was likened to the Ghost star

Brooke Vincent has stunned fans as they claim she looks exactly like Hollywood star Demi Moore.

The actress – who plays Sophie Webster in the Coronation Street – left followers doing a double take as she shared a shot of herself with boyfriend Kean Bryan and son Mexx on Instagram.

The photo showed the trio on their recent family holiday.

In the snap, Brooke posed for the selfie as boyfriend Kean stood behind her.

As the couple looked towards the camera, little Mexx appeared distracted by something on the floor.

Captioning the photo, Brooke, 28, wrote: “Sometimes Mexx, you just gotta take one for the team my boy! Wish we were still ‘holidaying.'”

But it was Brooke’s uncanny resemblance to the Hollywood actress that really got fans talking.

What did Brooke Vincent fans say?

One commented: “You look like a young Demi Moore here @brookelevivincent lovely pic.”

Another added: “Thought this was Demi Moore then.”

A third wrote: “@brookelevivincent you look like a young Demi Moore so pretty.”

While former co-star Michelle Keegan joked over little Mexx, saying: “He’s not one bit interested in that mirror selfie mate!”

Despite their complimentary comments, it hasn’t always been easy for the star.

Earlier this week, Brooke opened up on the pressures of bouncing back into shape after welcoming her son.

Appearing on ITV’s Loose Women, she said: “A lot of my friends have had children in the past and I kinda think it wasn’t spoken out.

“I didn’t know you had your baby and it takes you however long to get back into your jeans.”

Brooke later added: “You just assume your stomach is going to go down because the baby is out.”

The actress – who first joined the cobbles in 2004 – is currently on maternity leave after giving birth to Mexx last October.

Asked when she might return, Brooke recently admitted in a fan Q&A: “I’ve been on Corrie since I was 11 so it’s nice to have some time to be with my new baby and in our new home before going back.